Special Relief Commissioner (SRC) Pradeep Kumar Jena said the peak flood phase is on, and that while the situation is critical it is under control. “Today (Wednesday) night remains critical, so everyone (people in the Mahanadi basin) need to be watchful,” he said.

Jena said that 60 wards in 10 Urban Local Bodies have been affected by the floods.

“We are running free kitchens for a population of 60,000 in the flood-affected areas. Adequate number of polythene sheets have been stocked in view of the fresh low pressure area warning,” he added. 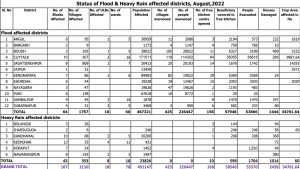