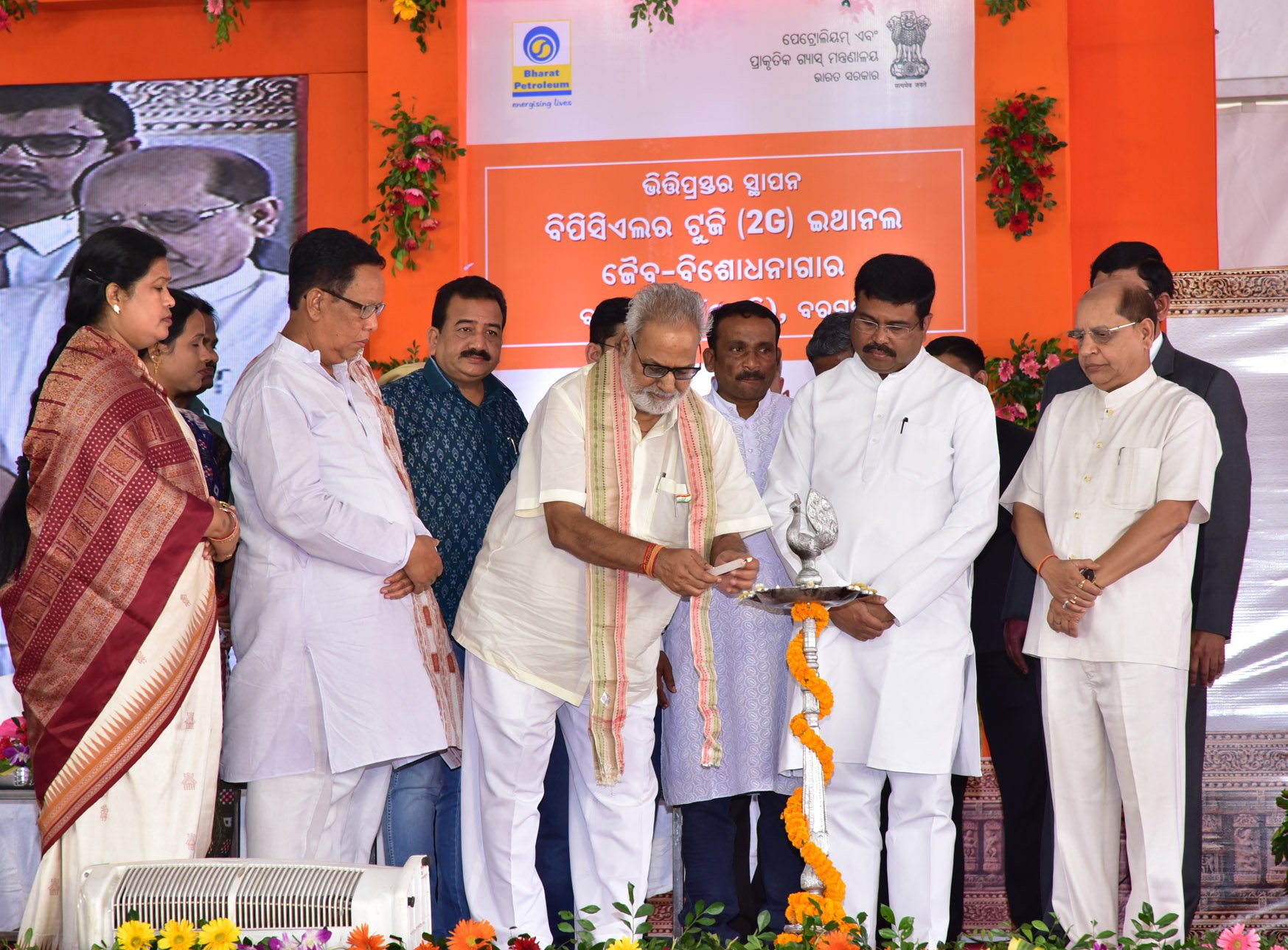 Bargarh: Governor Ganeshi Lal on Wednesday laid the foundation stone of second generation (2G) ethanol bio-refinery of Bharat Petroleum Corporation Limited (BPCL), which will be set up at Baulasingha village under Bhatli tehsil in Bargarh district.

Addressing the gathering, the Governor said, “Ethanol plant at Bargarh is a gift to the farmers of Odisha. Setting up an ethanol plant here is an exclusive example of the developmental works under ‘Sabka Saath Sabka Bikash’ programme by Prime Minister Narendra Modi. The plant is fully dedicated to the welfare of tribal and farmers of the state and it will further transform the socio-economic condition of this particular area with respect to the marginalized sections of the state.”

In his address, Union Petroleum and Natural Gas Minister Dharmendra Pradhan said, “With production of 17-18 lakh metric tonne paddy, there is always equal amount of straw available in Bargarh. Farmers hardly use 6-7 lakh metric tonnes as fodder for the cattle and other uses and burn the remaining 10-12 lakh tonne that creates severe environmental hazards, including production of CO2. Setting up of BPCL bio-refinery here will provide a permanent solution to such problems along with economic development of the farmers.”

The bio-refinery, a first-of-its-kind, will have a capacity to produce three crore litres of fuel grade ethanol annually using rice straw as feedstock and the ethanol produced from this plant will be blended with petrol. The cost of this project has been estimated at around Rs 1,000 crore.

Bio-fuels had assumed importance recently due to the growing energy security needs and environmental concerns. Several countries have put forth different mechanism and incentives to encourage the use of bio-fuels to suite their domestic requirements.

India has surplus biomass availability of about 120-160 MMT annually, which if converted has the potential to yield 3000 crore litres of ethanol annually.

The National Biofuel Policy of India 2018 targets 20 per cent ethanol blending in petrol by 2030, however due to non-availability of ethanol, the current blending is only around 3 per cent to 4 per cent. Setting up of 2G ethanol plants will help achieve this target.

The Bargarh bio-refinery will utilize about two lakh tonnes of rice straw annually as feedstock, which will be sourced from nearby Bhatli, Ambabhona, Attabira, Sohela, Burla and Lakhanpur.

The plant is based on zero-liquid discharge plant (ZLD) technology, where all the water will be recycled back into the plant. In addition to cleaner environment, this project will also help improve the socio-economic conditions of the farmers due to additional income from supply of waste rice straw to the bio-refinery.