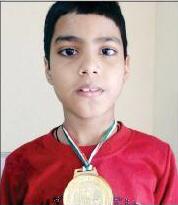 Bhubaneswar: Odia talents are shining on the world stage and how. In the latest instance of pride, Odia boy Ishan Debata has topped the International General Knowledge Olympiad (IGKO).

The Olympiad was conducted for school students across 40 countries. In the country, it was organised by the Science Olympiad Foundation of India.

He will receive a Gold Medal for GK, citations, certificate of merit and a cash reward for his feat.

Ishan is the son of media-entrepreneur Manash Debata and Swagatika Mishra, who originally hail from Tikanapur village in Kendrapada district.

The family is at present settled in Delhi. Ishan is a student of Class 4 at Kendriya Vidyalaya, Sector-8, RK Puram.

Ishan gave credit for his success to his parents and all the teachers and principal of his school.

Earlier in Class 2, he had won another International Gold Medal in Math Olympiad and Silver in Science Olympiad.

Last year, he was the only boy from Delhi zone to have successfully contested in all five categories of Olympiads including Math, Science, English, Cyber and General Knowledge as well as National Level Science Talent Search Examination (NSTSE).