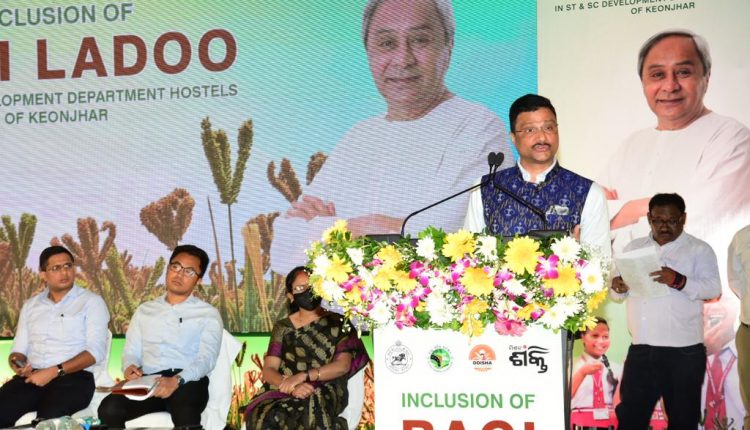 Keonjhar: Odisha government’s project for inclusion of Ragi Ladoo in SC and ST Development Department Hostels of Keonjhar district to improve the nutritional status of students was inaugurated on Saturday.

Principal Secretary of Agriculture & Farmers’ Empowerment, Arabinda Kumar Padhee, inaugurated the project at a function in Keonjhar in the presence of a host of dignitaries including Keonjhar Collector.

The event was also attended by all the Headmasters and Headmistress of the SSD Schools along with one student representative.

The Principal Secretary while appreciating the unique initiative of Keonjhar district spoke about different varieties of millet and its health benefit. He also emphasised on the ‘Availability, Accessibility and Affordability’ of millets to ensure its larger coverage and consumption among the larger public sphere.

Collector of Keonjhar  Ashish Thakare said the Ragi Ladoo has been introduced with a core objective to improve the nutritional status of students residing in SC and ST Development (SSD) hostels in the district.

Ragi Ladoo will be given as a morning snack to ensure a portion of daily recommended protein and calcium is provided to the children in a growing age.

Under this project, one Ragi Laddu a day is to be served to the residents of SSD hostels in addition to the existing Mid-Day Meal (MDM). Ragi Laddu Mix is to be delivered from THR units to the SSD Hostels and Ladoo’s to be prepared by existing cooks of the SSD Hostels.

The project will cover around 39,000 students residing in the SSD hostels for which an annual budget provision of Rs 1.57 crore.

With the launch of this project, Keonjhar becomes the first district in the state to include millets in SSD Hostels.