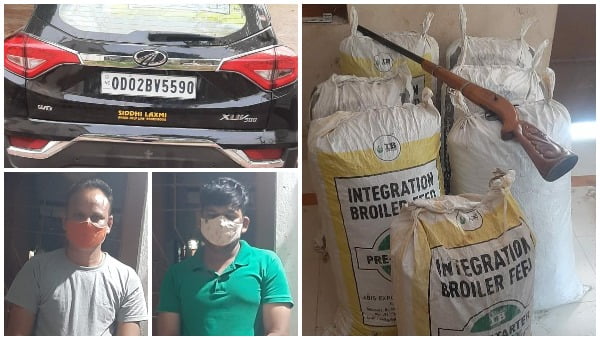 Bhubaneswar: The Special Task Force (STF) of the Odisha Crime Branch has arrested two persons, including an employee of the State Bank of India (SBI), for alleged smuggling of ganja.

The accused have been identified as Sushanta Kumar Sahoo, who works as Clerk-cum-Cashier at State Bank of India’s Kishore Nagar branch in Angul district, and Jugal Sahoo of the same area.

They were apprehended during a raid near Banka Palasa village under Kishore Nagar police limits in the district on March 21. Ganja weighing 165 kg, one SBML gun, an SUV, a motorcycle and other incriminating materials were recovered from them.

A case under relevant sections of NDPS Act and Arms Act has been registered in this connection and further investigation is on, an official release said.

Since 2020, STF in the special drive against narcotic drugs has seized more than 50 kg of brown sugar, 91 quintals of ganja and arrested 130 drug dealers/peddlers.

March Storm In Bay Loses Steam, To Cross Myanmar Coast As A Depression This Afternoon

Coal Crisis: Railway Board Chairman Assures All Help To Odisha’s MCL For…