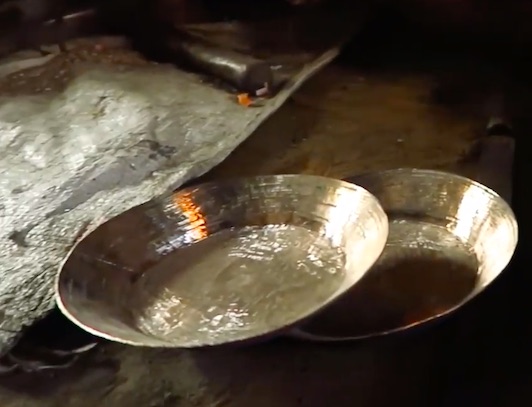 Bell metal, known as ‘Kansa’, is a form of bronze with lower content of copper. It has been traditionally used for making bell, bowls and plates. Brass, which is known as ‘pitala’, is a substitutional alloy of copper and zinc and is used for making different items such as water containers and plates used for worshipping purposes, ‘singhasana’ and idols.

Brass and bell metal craft is practised by Kansari artisans. In the villages, these are extensively used for eating and cooking, which according to Ayurveda balances the body’s pH level. As tradition has it, a bride is also presented with items of brass and bell metal as per the status of the family.

‘Ghanta’ or ‘ghanti’m indispensible for all kinds of worshipping, gongs beaten and used even during RathYatra in Puri and ‘manjiras’, the two cupped convex discs tied with strings together, are also the products of this group of craft. ‘Ghantis’ made of bell metal are put around the neck of cattle in rural Odisha.

“The indispensability of the craft and the socio-economic values are rooted in the ancient past, justifying the prominent role of the Kansari as an artisan caste in Odisha,” veteran GI expert and IPR attorney P Sanjai Gandhi was quoted as saying by TOI.

The bell metal craft reached its height of perfection in Odisha during the rule of the Ganga kings from the 11th century onwards, he said, adding that the availability of rich mineral resources in northern Odisha provided the necessary physical background for the development of metal craft.