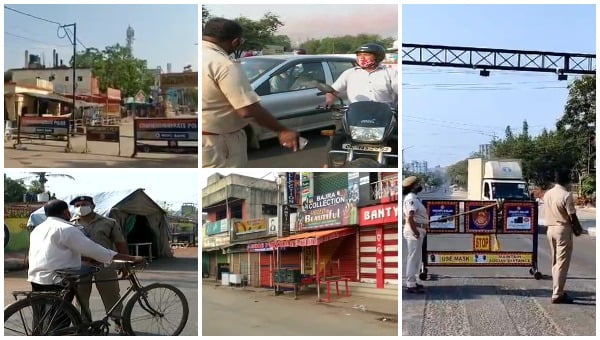 Bhubaneswar: The weekend shutdown in all urban areas of Odisha began at 6 am on Saturday after an hour of relaxation from 5 am for fitness activities.

According to police sources, 25 checkpoints in Cuttack and 43 in Bhubaneswar have been set up with 12 and 20 platoons of forces respectively for enforcing the shutdown guidelines.

A total of 250 officers (100 officers in Cuttack, 150 in Bhubaneswar) are supervising the overall arrangements.

Commissioner of Police Saumendra Priyadarshi has warned violators in Bhubaneswar and Cuttack of strict action.

The Bhubaneswar Municipal Corporation has issued a helpline number 1929 on which people can contact for shifting the patients and arranging ambulance or taxis during this period.

• Home delivery of food, groceries, vegetables, and essential items, restaurants through aggregators like Zomato and Swiggy.

• Food and grocery stores such as Reliance Fresh, Big Bazaar, Chilika Fresh, and others for home delivery only

In a video message, Special Relief Commissioner Pradeep Jena on Friday said that one-hour relaxation from 5 am to 6 am will be allowed for fitness activities like morning walk, jogging, and cycling.

The weekend shutdown is being imposed to break the COVID-19 infection chain by limiting the movement of people.

Meanwhile, Odisha saw a record spike of 6,647 new cases and eight deaths in the last 24 hours.

Weekend Shutdown In Odisha: No Pass Needed For Those In The…