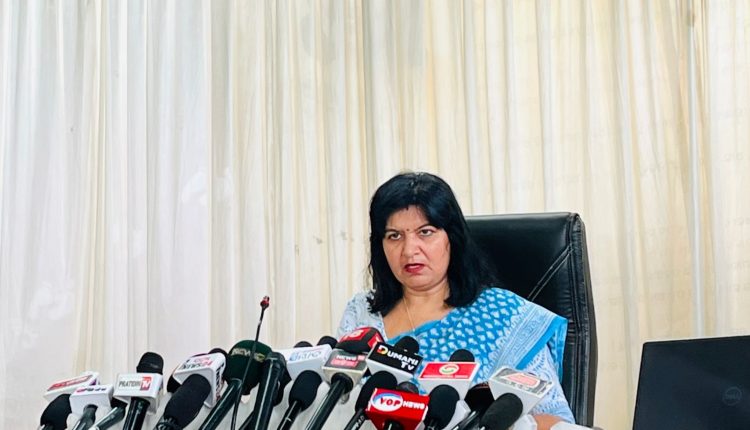 Bhubaneswar: Senior BJP leader and Bhubaneswar MP Aparajita Sarangi on Monday lashed out at the BJD government in Odisha and alleged that the state was losing thousands of crores of rupees due to collusion between corrupt officials and private players in newly auctioned mines.

Claiming that “deliberately downgrading” the quality of iron ore being produced in many of the auctioned mines has been leading to huge losses to the state exchequer, she said this cannot happen without the connivance of the state government and its machinery.

Presenting data at a press meet in Bhubaneswar, the BJP MP claimed that the share of low-grade iron ore in 2019-2020 was 23 per cent of ores which increased to 95 per cent in 2021-2022. As the export of minerals was done by reflecting them as low grade to avoid export duty, the state became a big loser, she said.

In 2019-2020, during the pre-auction period, the proportion of low-grade ore in a mine used to be substantially lower. However, after the auction the new miners working in the same mines started showing a disproportionately higher volume of low-grade ore, Aparajita said.

“Under-estimation of grades has cost the exchequer thousands of crores of rupees and the amount which belonged to the poor people of Odisha has been swindled by this ruling party and mining mafia nexus,” she claimed.

The BJP leader further said that the Shah Commission, set up by the Centre, gave its report regarding various irregularities including the Odisha government’s turning a blind eye to illegal mining in different mines of the State.

“Though the state government was aware of the scam, it had not paid heed to Shah Commission’s report,” she maintained.

The Shah Commission stated that the extent of irregularities in the mining sector in Odisha was to the tune of Rs 59,000 crore, she said.

“It was expected that after Shah Commission’s indictment, the state government would make sincere attempts to check irregularities. Corruption and irregularities, instead of being checked, found new ways under the BJD government,” the BJP parliamentarian said.

Claiming that the fund of the District Mineral Foundation (DMF) was not being utilised properly, she said it mandated the miners to pay 15 per cent of the average sale price notified by the Indian Bureau of Mines as royalty and 10 per cent of the royalty amount to be contributed to the fund where the mineral has been raised and extracted.

In many of the mineral-bearing districts, the amount is not being fully utilised or utilised in a way to bring about a substantive improvement in the livelihoods of the people of the district, Aparajita alleged.