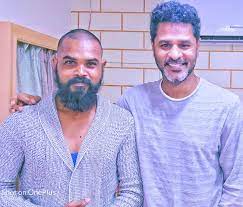 Keonjhar: The Salman Khan-starrer ‘Radhe’ scheduled to be released on May 13 on the occasion of Eid, is bound to bring a smile to every Odia’s lips. Playing the role of a villain in the movie is none other than a local youth, Ram Sirka.

Brushing shoulders with Salman Khan is a dream come true for the 36-year-old who has waited more than ten years for this day. Sirka was born to labourer parents, who migrated to Jamshedpur in neighbouring Jharkhand from Khanta Gaon village, under Bijatala block of Mayurbhanj district, in search of jobs. But this boys’ determination not to follow the fate of his parents took him to Mumbai.

According to Sirka, his parents left Mayurbhanj in 1974, 11 years before he was born. Sirka completed his graduation from a college in Jamshedpur and left for Mumbai in 2005 but his big break came only in 2016.

“Since childhood, I had a dream of becoming an actor. As we did not have much money, I left for Mumbai to fulfil that dream,” he told Times Of India (TOI).

His knowledge of martial arts came to his rescue and Sirka took up a trainer’s job. Unknown to him, the path to Bollywood had already opened for him. He got noticed after a few year and some celebs started training under him.

His association with celebrities like Salman Khan, Prabhu Deva and many others as a trainer, got him a chance to work in ‘Dabang 3,’ ‘Mard Ko Dar Nahin Hota’ and a Malayalam movie ‘Kumfu Master.’

Sirka, who is married and has a daughter is also keen on doing Odia movies if given a chance. Having come this far, he has not forgotten his days of struggle. “There were days when I slept on an empty stomach,” he said.

Power Tariff In Odisha To Go Up From April 4; Know Revised Rates