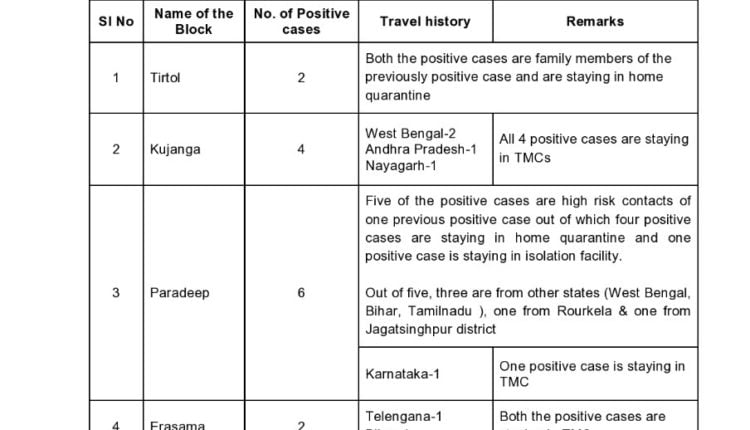 Jagatsinghpur: The COVID-19 tally in Jagatsinghpur district rose to 469 on Friday with 16 fresh cases detected in the last 24 hours.

Of the 16 cases, six cases have been reported from Paradip, four from Kujanga, and two each from Tirtol, Erasama and Balikuda.

Among the six cases of Paradip, five have been affected by a previous positive case. Four of them have been sent to home quarantine while one is in isolation facility.

Of the five cases, three are the returnees from West Bengal, Bihar and Tamil Nadu, one from Rourkela and one from Jagatsinghpur. The rest positive case is a Karnataka returnee and is staying at the Temporary Medical Centre (TMC).

Out of the four cases detected in the Kujanga block, two are West Bengal returnees and one each from Andhra Pradesh and Nayagarh.

Both two cases in Tirtol block are the family members of the previously positive case and are staying in the home quarantine.

Similarly, the two cases in Erasama are returnees from Telangana and Bihar. Both the positive persons are staying in TMC.

Of the two cases in Balikuda, one is a Delhi returnee and is accommodated in TMC while the other person is a Maharashtra returnee who was detected as positive at SUM Hospital, Bhubaneswar.

With 342 recoveries, Jagatsinghpur district has 127 active cases at present.