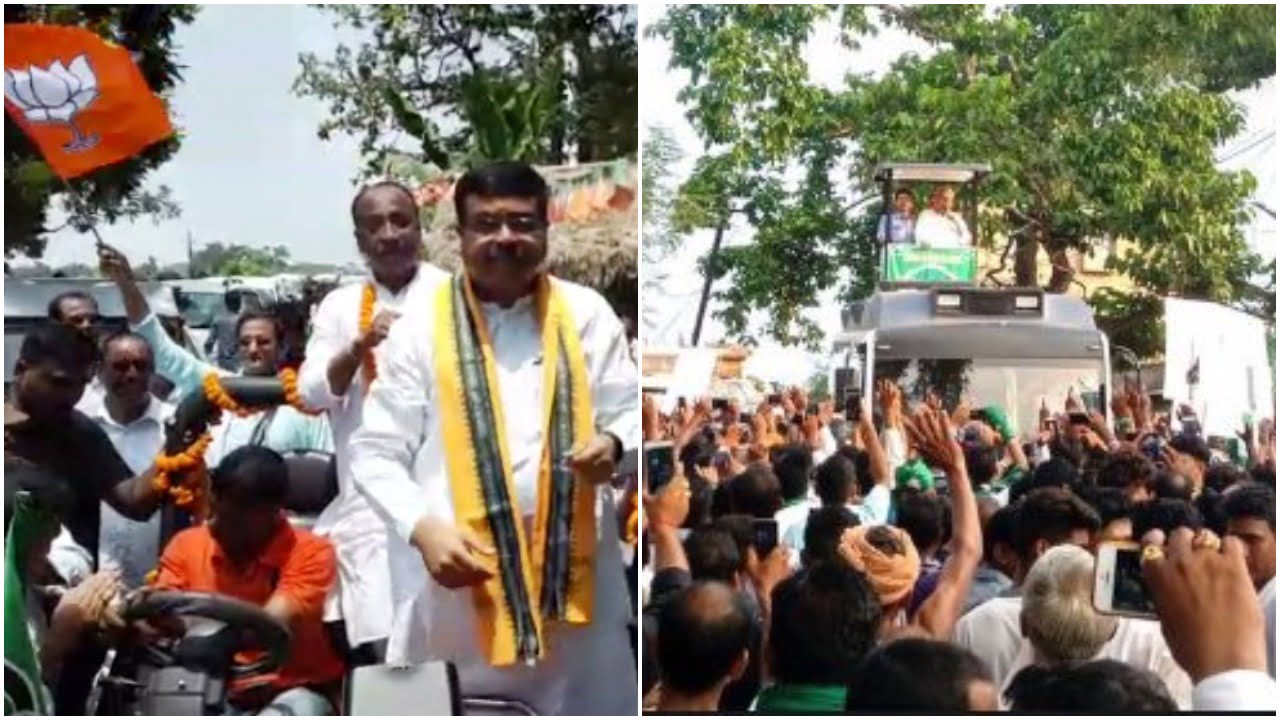 Patkura: Can Bijoy Mohapatra overcome his electoral jinx and upset Naveen Patnaik’s applecart? Or, will he go the Baijayant Panda way? As the D-Day for the high-profile Patkura polls becomes nearer, all eyes are on this assembly constituency in Odisha’s politically-conscious Kendrapara district.

Like the recent elections for Kendrapara Lok Sabha, which BJP nominee Baijayant lost to his former party BJD’s candidate Anubhav Mohanty, the battle for Patkura has become a talking point with Naveen’s friend-turned-foe Bijoy crossing swords with BJD candidate Sabitri Agarwalla, wife of Late Bed Prakash Agarwalla. Interestingly, Bijoy, who was a founder member of BJD, is now donning saffron colours while Sabitri represents the Conch party, which her husband had joined after quitting BJP.

The election, slated for July 20, is expected to be a direct fight between the BJD and the BJP with the Congress turning out to be an also-ran.

Akin to the Kendrapara polls a few months ago, this too has turned out to be a prestige issue for the BJD and the BJP. Some are even projecting it as a Bijoy versus Naveen fight as the two share a long political rivalry spanning over two decades. Naveen had unceremoniously removed Bijoy from the regional party in the run-up to the 2000 elections. And ever since, both have been much-discussed political opponents.

If BJD retains Patkura, Naveen and Co’s invincibility in Kendrapara district will again be proved. For Bijoy, it is a litmus test and could be a make-or-break opportunity to resurrect his political career; he has been unsuccessful in entering the Odisha assembly since BJD president Naveen Patnaik cancelled his nomination as the candidate from Patkura at the last moment and chose Atanu Sabyasachi Nayak in 2000.

Prior to that, the veteran leader had won the seat four times in a row since 1980. Patkura rejected him in 2004 and 2009 Assembly elections. He again tasted defeat at the hands of Atanu in neighbouring Mahakalapada in 2014.

Top BJP leaders, including Union Ministers Dharmendra Pradhan and Pratap Chandra Sarangi and Bhubaneswar MP Aparajita Sarangi, have been campaigning for Bijoy. Baijayant has also thrown his weight behind Bijoy.

The election in Patkura, which was earlier slated for April 21, was postponed twice following the death of Bed Prakash and again in view of cyclone Fani, which hit Odisha in May.

Hoping to cash in on Bed Prakash’s demise, the BJD has fielded his wife. However, people are equally sympathetic for Bijoy, who they feel has been treated unfairly. “It has been 19 years. Bijoy certainly deserves a chance. Despite being traditional Congress voters, we will vote for him,” said an elderly man, refusing to divulge his name, at Garadpur.

At a feast, a few people reluctantly spoke to Odisha Bytes and said the election is between Bijoy and the state machinery. If Bijoy wins, he could pose problems for the government in the assembly, they added.

Bijoy said, “This is a fight against the administration, which is indulging in irregularities. They (BJD) are planning to buy votes, but Patkura voters are not for sale. This is a question of Patkura’s swabhimaan (self-respect).”

Near Patkura market, a few people playing cards said the place has seen nil development. “Fifteen years of Congress rule and then 19 years of BJD rule, Patkura is still the same. Though a few roads have been laid, waterlogging continues to be an issue here,” complained Parsuram Nandy, a local.

Law and order is also an issue here. “Liquor shops have come up in every nook and corner of Patkura that it is impossible for women to walk on the streets during the evening,” said Manoj Nandy, a shop owner.

The stadium near the school is frequented by drunkards making it unsafe, added Purushottam Nandy.

Biju In their Hearts

Former Chief Minister Biju Patnaik continues to hold a place in the hearts of the people here. The legendary leader was elected to the Lok Sabha for the first time from Kendrapara in 1977.  He was re-elected in 1980 and 1984. This love for Biju can get the BJD candidate some votes. The regional party, however, is banking on the support of higher percentage of women voters, for whom Naveen has over the years rolled out various schemes like Mission Shakti, and effective poll management.

During his road show on Wednesday, Naveen appealed to the people of Patkura to vote for his party candidate and assured that he would personally look after the constituency, a promise he had also made in Kendrapara.

Jayanta Kumar Mohanty of the Congress hopes to tap in the anti-BJP and anti-BJD votes. State Congress president Niranjan Patnaik and senior leader Narasingha Mishra were seen campaigning for Mohanty, whom Bed Prakash defeated by 48,000 votes in 2014. But the Hand party seems set to finish a distant third. Even traditional Congress voters feel they should exercise their franchise in favour a party that has the potential to win.

Similar to the Kendrapara LS elections, the Muslim voters seem to hold the key to the Patkura poll outcome. An estimated 17,000 voters belong to the minority community and, if pollsters are to be believed, they are unlikely to press the BJP button. “Bijoy babu acha aadmi hain, lekhin hum BJP ko vote nahin denge (Bijoy is a good man, but we will not vote for the BJP),” seems to be a common refrain.

Come Saturday, the choice the electorate of Patkura makes could add to Odisha politics an interesting twist: the re-emergence of Bijoy Mohapatra or curtains on his political career.

Patkura Assembly Poll: A Look At The Arrangements