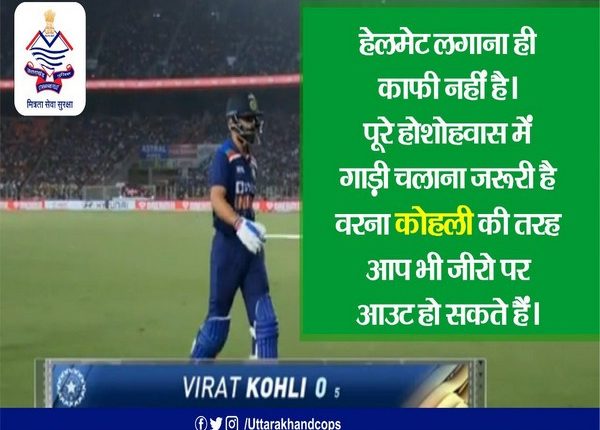 New Delhi: It’s not unusual for law enforcement agencies to use contemporary memes or issues to raise awareness. However, a tweet by Uttarakhand Police on Friday referring to Virat Kohli’s performance during the India vs. England T20 series has left many netizens fuming.

While fans were left disappointed after the Indian skipper got out without scoring any runs in the first game at the Narendra Modi stadium in Ahmedabad, the cops decided to poke fun using it as an example to draw attention to rash driving.

“A helmet is not enough! It is necessary to drive in full consciousness. Otherwise, like Kohli, you too can be out on zero,” read the tweet in Hindi, shared by the police handle.

While the tweet got a few laughs, not all were impressed. Cricket buffs defended the skipper and criticised the police force, saying the tweet was “uncalled for”. Many said it was a disgrace to stoop so low to troll a man of such high calibre, The Indian Express reported.

Here are some angry reactions from cricket fans:

Sorry, But this is not a good post from a verified Govt organization handle to troll the Player of such a highest calibre. Over that, he is a Captain of Indian National Cricket Team.
No offence on the message conveyed,but this tweet is a disgrace!#ViratKohli
@uttarakhandcops https://t.co/XPlv0QJax9

Reyy before this match kohli scores are 9,40,85 tht too in Australia
he is second highest run getter for india in 2020 after rahul
very very disgusting tweet🤮🤮 https://t.co/pHYrenJigd

this isn’t a good way to teach or aware someone by criticizing a person for his bad performance on the field. https://t.co/0If14DbS2v

Temples Should Be Handed Over To Devotees, Says Sadhguru