Pizza And Spirituality At Pushkar 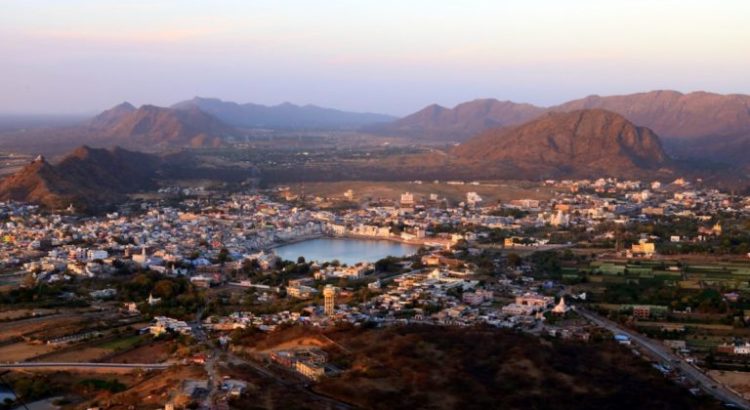 Pushkar, located in the heart of Rajasthan, which means the land of the kings, is a place like no other. It is not only rich in culture, history and colour but is also steeped in spirituality.

Pushkar is spiritual, free, authentic and slow paced. It is not everybody’s idea of a perfect holiday or travel destination. Many tend to pass it by in a hurry. But to those who choose to linger on, Pushkar reveals its beauty, slowly but definitely.

I felt that Pushkar has two worlds living next to each other. One world belongs to the local residents and Indian Hindu pilgrims. The second world belongs to the people from all over the world who troupe to Pushkar year after year as seekers. Seekers of some elusive strain of spirituality and freedom of spirit which the regimental life they lead in their home countries does not possess.

But rather than confronting or interfering, in Pushkar these two worlds seem to exist in harmony, enjoying each other’s company and gaining strength from each other, all the while maintaining their freedom of expressions and way of life.

Where is it? How is it spread?

Most of the foreign visitors flocking to Pushkar are of the backpacker variety. These can also be identified as ‘the budget travellers’. Naturally, most of the hotels and eating joints cater to them.

But the number of high-end travellers is also growing up now, especially with the rapid increase of top-end hotels in the town in recent past.  Now a good number of Japanese visitors are also making the trip to Pushkar.

The holy lake is edged all around with ghats and around these ghats, there is a continuous circle of buildings which are a jumble of temples, hotels and public lodges. The outside of this circle of buildings is lined by a busy street. This street is another place where you are likely to witness life in Pushkar. The street on both sides has a long line of shops selling everything from colourful clothes, silver jewellery, religious books, souvenirs, eating joints and more. These shops are interspersed by havelis (traditional houses) turned into hotels or some modern hotel buildings. Various narrow lanes run into the town from this street, which leads to more hotels and temples.

The outskirts of the town have a number of resorts, people organizing short or long camel safaris into the rugged desert terrain around the town and a couple of temples located on surrounding hills which present a great view of the town, such as Savitri Temple.

The sacred lake which has a total of 52 bathing and praying ghats also sees this existence of separate worlds. Ghats is a stepped edge of a water body, be it a lake or a river, which makes the water accessible to people, so that they could indulge in their prayers or ritual bathing with ease and in safety.

Much of the action in Pushkar takes place around these ghats. The people flock to these ghats very morning and evening, and on special days.

Whereas the local or Indian visitors with the religious mind are seen in Ghats such as Brahma ghat or Varah Ghat, the tourists concentrate on the ghat located on the opposite side, that is, Jaipur Ghat. This Ghat is also called the sunset point. Here the foreign tourist community assemble every evening and most interestingly, the ghat turns into one big performing stage. Here individuals could be seen showing their acrobatic or juggling skills. Some others can be seen playing music and singing. It’s a place to give expressions to your creativity.

There are no written rules which bar foreigners from any particular ghats. They are welcome to visit any ghat as long as they follow the basic rule of taking off their shoes when approaching anywhere close to the holy lake. Just follow the lead of the locals in taking off shoes and you will be fine.

PUSHKAR is one of the holiest places for Hindus. The highest level in the Hindu pantheon of goods is shared by the holy trinity of Brahma (the creator), the Vishnu (the preserver) and Shiva (the destroyer). Though through the length and breadth of the Indian subcontinent one will come across several temples dedicated to different forms and incarnations of Vishnu and Shiva, there are no temples for Brahma. Pushkar is the only place that has a temple of Brahma. The temple of Brahma in Pushkar is the main attraction for any visitor to the town. The foreigners are welcome to the Brahma temple and many more temples dedicated to other Hindu deities. Though the foreigners are not allowed entry into two important religious institutions in the town, the Old Rangji Temple and Raghunathji Temple.

Another aspect that should find a pronounced mention is the food that is available in Pushkar’s numerous food joints and restaurants. It is a curious sight to see menus of a number of eating places written in Hebrew, a clear indication of the huge number of visitors that Pushkar draws from Israel. The food largely caters to this Israeli and western world visitors. When it comes to food the holy grail is made up of the three Is.

That is Israeli, Italian and Indian food. Many of the cooks serving these dishes have trained abroad or have been trained by the visitors themselves. As a result, you are likely to encounter the most authentic versions of homemade pasta, pizzas made in wood-fired clay ovens, bread and more. Owing to the religious nature of the town, no non-vegetarian food is allowed to be eaten or cooked. That means all meats are out. Even eggs are not allowed. But some places do serve some egg dishes on the quiet, but camouflaged in exotic names, such as Israeli dish Khavita, instead of an omelette

A couple of popular roadside stalls in the main market serve tasty falafel rolls, the best Pizza (great taste and value for money) is served by the Om Shiva & IL Fornaio Pizzeria,  a rooftop restaurant in the main market. Just across the street, this Pizzeria on the ground floor is Narayan Café. They serve the best breakfast in town or for that matter anywhere in India, in the form of a combination of homemade muesli, curd, loads of cut fruits and grated dry coconut. It is truly amazing preparation.

Another special attraction that Pushkar has and which draws thousands of people in the month of November is the famed Pushkar Animal fair. Every year animal owners from Rajasthan and neighbouring states converge to the fairgrounds on the outskirts of the town with an aim to sell them to thousands of interested buyers. Thousands gather just to witness this spectacle. The fair is an opportunity to not just trade in domesticated animals such as camels, horses, cow, bullocks, buffalos, donkeys and more, but also to witness the culture of Rajasthan from close quarters. The fair sees dance, music and a lot of colour.

The hotel with the best location and high quality is the Hotel Pushkar Palace. It is located near the popular Sunset Point. Its open dining area looks right into the lake. There are other hotels which are also located just next to the lake. One of the better ones is the Bharatpur Palace. It has a terrace with splendid lake views. The hotel we liked the best is, Hotel Seventh Heaven, located near Old Rangji Temple, a five-minute walk from the centre of the main market street. It is a tastefully and imaginatively redone old haveli. It is very atmospheric with vines running all over the four floors from the inner courtyard. The owner and his mother stay on the ground floor, as a result, he is always available to cater to your needs or to strike a conversation with you, if you so wish. There are a couple of friendly cats also moving about, with one of them having a nice name, Ghazal. Their restaurant on the top floor has a very romantic setting and food is good though not great. The pulley system used to ferry food from the ground floor kitchen to the rooftop restaurant is a very novel and interesting sight.