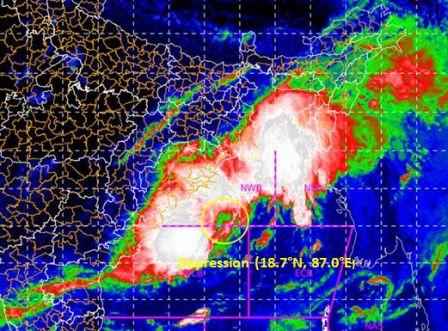 Bhubaneswar: With the well-marked low pressure intensifying into a depression over the Bay of Bengal in the morning on Thursday, the India Meteorological Department (IMD) said that there is no possibility of a cyclonic storm.

Informing the media, IMD DG Mrutyunjay Mahapatra said that the depression over the north-west and west-central Bay of Bengal about 180 km south-south-east of Paradip is likely to cross West Bengal-Bangladesh coast as a deep depression between Sagar Island & Khepupara by the afternoon on October 23.

Mahapatra also said that the distant cautionary signal no-3 has been hosted in all ports in Odisha.

Meanwhile, the IMD in a special mid-day bulletin issued red, orange and yellow warning for the following districts.

October 22
(Red warning)
Heavy to very heavy rainfall at isolated places over the districts of Jagatsinghpur, Kendrapada, Bhadrak and Balasore.

(Orange warning)
Heavy to very heavy rainfall at isolated places over the district of Puri.

Due to inclement weather, fishermen have been advised not to venture into the deep sea along and off the Odisha coast and north Bay of Bengal till October 24 as squally wind speed reaching 50-60 kmph and gusting to 70 kmph will make the sea condition rough to very rough.

High-Tech Face Masks Market Is Growing And How!

When King Kohli Went Through Depression, Felt Like World’s…