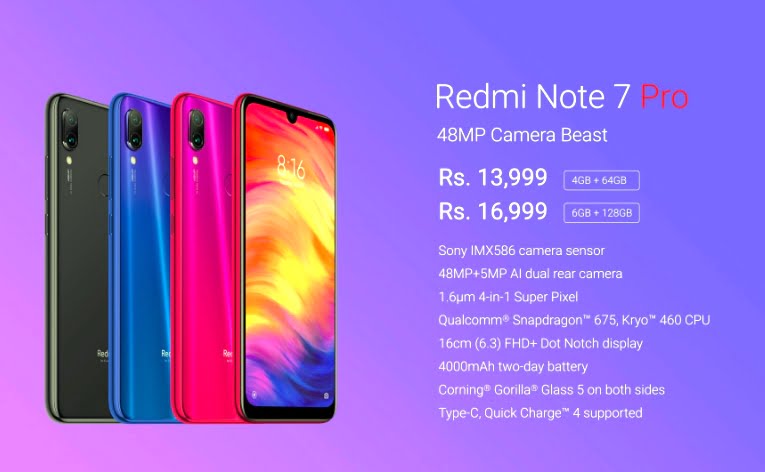 New Delhi: A day after Samsung launched its budget series killer M30, Xiaomi launched two phones, the much-anticipated Redmi Note 7 and Note 7 Pro on Thursday. The prices are as follows:

As reported earlier, the highlight of Redmi Note 7 Pro is a mammoth 48MP rear camera sensor with f/1.79 aperture. Xiaomi’s Anuj Sharma explained that the big sensor will allow better night mode photographs. The phone by default will compress the 48-MP output to 12-MP images and save space as one 48-MP photograph will take around 15MB of storage. The 48-MP mode can be manually selected, informed Sharma.

It is powered by Snapdragon 675 whose performance is comparable to phones with Snapdragon 710 processor, said Sharma.

Specs include a 19:5:9 waterdrop notched 6.3-inch full-HD+ LTPS display protected with Corning Gorilla Glass 5. It is paired with up to 6 GB RAM and 128 GB storage. It has a 4,000mAh battery with Quick Charge 4 support.

Redmi Note 7 Pro has 2.5D curved glass all around making it all-glass body phone. It has a gradient finish and will be available in funky colours such as Onyx Black, Ruby Red, and Sapphire Blue.

The cheaper Redmi Note 7 comes with Snapdragon 660 processor and 12MP-5MP dual camera setup. It also has a 4000 mAh battery with Quick Charge 4 support.

Both phones are splash-proof, not waterproof. Both have face unlock.

Redmi Note 7 will go on sale on March 6 and Redmi Note 7 Pro on March 13. Both phones will be available on Mi.com, Flipkart, and Mi Homes. Launch offers from Airtel available.

One Dies In Road Accident In Malkangiri