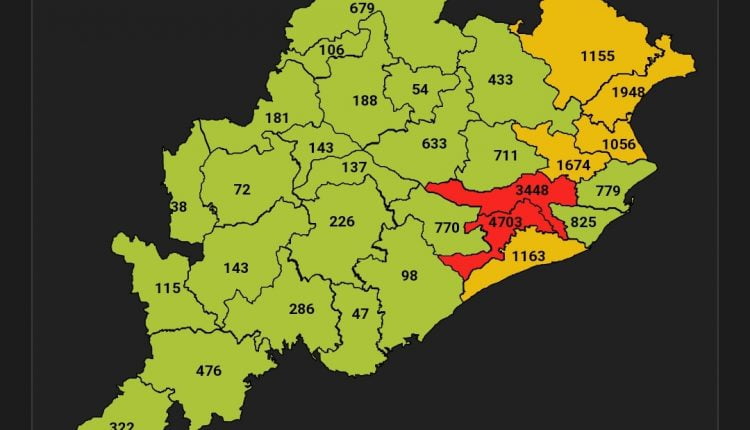 Bhubaneswar: The test positivity rate (TPR) crossed 3 per cent again on Tuesday and stood at 3.09 per cent with 1930 of 62410 samples testing positive for COVID in the last 24 hours.

The TPR was 2.73 per cent on Monday. The state also saw a sharp drop in testing as 1933 new infections were detected from 72754 samples the previous day.

Till Monday evening, Khurda and Cuttack districts were in Red Zone with 4703 and 3448 active cases. The TPR in these districts was 5.4 per cent and 5.6 per cent respectively.

While speaking to mediapersons on Tuesday, Director of Medical Education and Training (DMET) Dr CBK Mohanty said special focus is on Khurda and Cuttack and a few other districts.

“There has been a fall in the infection rate but the problem persists and therefore people should not let their guard down. The infection may increase if people, from states where cases are rising, travel to Odisha. We have been taking every precaution but the Centre needs to look into this danger and issued SOPs accordingly,” he said.

He said that those people need to undergo mandatory quarantine on their arrival in the state.

“The state had witnessed a resurgence in COVID with people returning from the bordering districts. Last year, cases had spiralled after the Centre allowed inter-state movement. We should learn from our past mistakes and be careful,” he said.

“The number of COVID cases is rising. We need to take strict action to curb the situation at the micro-level. We need to keep an eye on COVID variants, experts are studying them. We need to encourage people to follow COVID19 appropriate behaviour,” Prime Minister Narendra Modi said on Tuesday during his interactions with Chief Ministers of the North-Eastern states via video conferencing.

As most people from outside the state generally travel to Bhubaneswar and Cuttack, this may signal trouble for the twin cities of Odisha. Among 4703 active cases, 1136 belong to Bhubaneswar. Cuttack city has 1258 active cases.

The decision to unlock districts will be taken after reviewing the COVID transmission rate and other factors like declining cases, the DMET added.

Seamless Connectivity In Bhubaneswar From September This Year; Know The Other Benefits