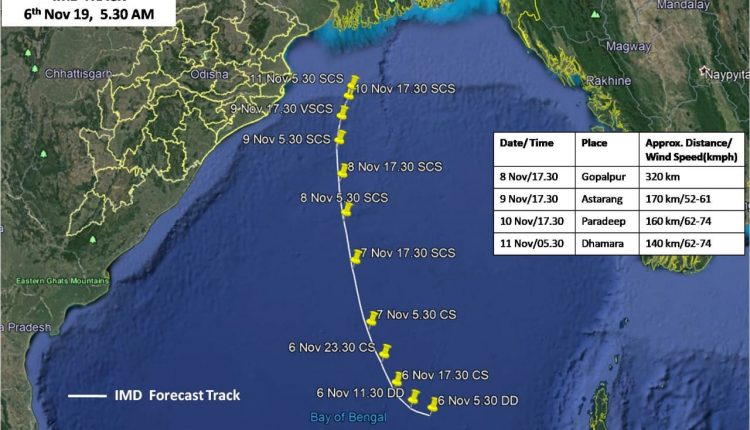 “Two ODRAF teams each have been deployed in these nine districts. One NDRF team each have been despatched to six districts and fire services personnel kept on standby,” the SRC further said after a high-level preparatory meeting on Cyclone Bulbul here.

The Balasore and Kendrapara district administrations have also cancelled leave of all government officials for two days (Friday and Saturday) in view of the impending cyclonic storm.

Earlier as a precautionary measure, the district administrations of Puri, Jagatsinghpur and Kendrapada districts had declared two-day holiday for school, colleges and Anganwadi centres from Friday.

The IMD has forecast intense rainfall activity in Puri, Jagatsinghpur, Bhadrak  and Kendrapada from November 8 evening under the influence of the cyclonic storm Bulbul. Some places in these districts will experience heavy rain on November 8 and 9.

During the period, squally and strong wind speed reaching 45-55 kmph gusting up to 65 kmph will blow from November 8 afternoon in Kendrapara, Jagatsinghpur, Balasore and Bhadrak districts. The wind speed will increase to 70-80 kmph gusting up to 90 kmph towards the evening of November 9 in Jagatsinghpur, Balasore and Bhadrak districts. However, the wind speed is likely to decrease from November 10, the IMD mid-day bulletin said.