Street Vendors Scuffle With Cops Near BMC Office In Odisha Capital; Know Why 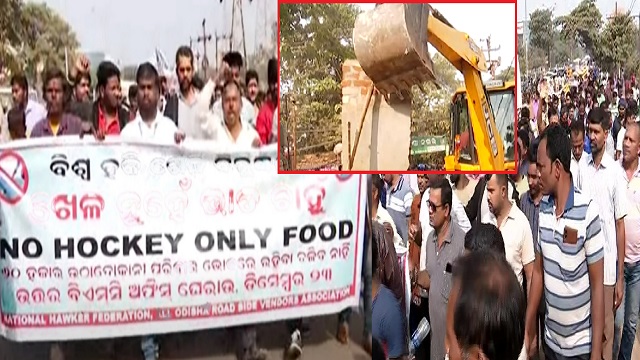 They mobbed the office of north BMC and a scuffle broke out between the agitating vendors and police when the latter tried to prevent them from entering the office premises.

According to sources, the street vendors are protesting against the ongoing eviction drives by the civic body ahead of the Men’s Hockey World Cup 2023 without providing any alternate arrangement.

They alleged that an announcement was made last evening and tailor shops, and small food outlets near Patia Big Bazaar were demolished on Friday morning. “The BMC suddenly announced the eviction drive on Thursday evening. We were not informed about alternate places to relocate nor did they provide any compensation for the losses incurred. This decision is completely unfair,” a tailor shop owner S. Jayati Patra told the media.

Likewise, a church near Infocity area was also demolished.

Meanwhile, the National Hawkers’ Federation and All Odisha Road Side Vendors Association took out a rally from Damana Square over hosting the Hockey world cup.

“Utkal Nikhila Khetriya Traders’ Trust had demanded BMC to rehabilitate poor vendors before evicting them. Previously, the Orissa High Court had instructed the same to municipal authorities. But the BMC failed to adhere to the court’s order. Acting against the court’s order, it kept on demolishing stalls of small-time vendors. That’s why we have gathered to raise our voices against this injustice. The protest will be intensified in the coming days if we are not rehabilitated,” said an agitator.

Pak Drone Shot Down By BSF At Punjab Border