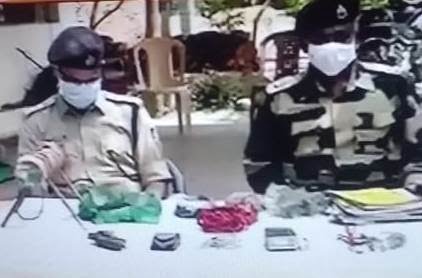 Malkangiri: Security personnel recovered explosives hidden inside a forest in the cut-off area of Malkangiri district on Monday.

Malkangiri SDPO Prahllad Meena informed that following an intelligence input about the movement of some Maoists, BSF and the Special Operation Group (SOG) personnel launched a joint search operation in Jodamba panchayat area in Chitrakonda block.

During the operation in the forest in Mukudapalli and Gorasetu, the security personnel came across a mound under a tree. Later, they dug out the pit and recovered one country-made gun, one claymore mine, one oxygen cylinder, 8 detonators, a bundle of wire and some Maoist brochures and leaflets.

The SDPO said the Maoists might have hidden the explosives to ambush security personnel. A combing operation in the area has been intensified, he added.

Notably, BSF personnel had recovered seven live landmines and a tiffin bomb from under a bridge in Jodamba panchayat on October 19.