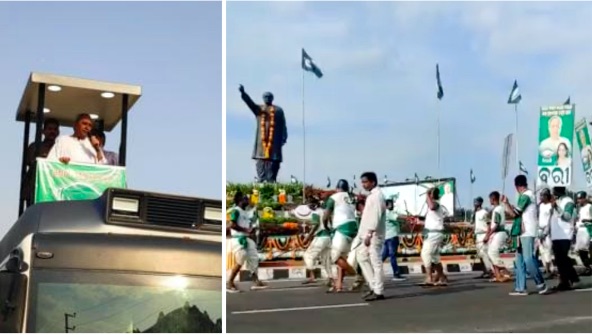 Bhubaneswar: The BJD is all geared up to accord a grand welcome to Chief Minister Naveen Patnaik Biju Patnaik Airport here on Tuesday when he arrives from New Delhi after receiving the Lifetime Achievement Award by the Capital Foundation Society.

Huge cutouts and posters of Naveen have been put up and barricades have been erected for the huge crowds, which will throng the airport. In what is been presumed as a show of strength by the ruling party, around 50,000 people from various parts of the state are expected to greet the CM on Airport-Naveen Niwas road.

According to sources, Naveen will be brought out in a rally in a special bus, fitted with a 16-tonne AC unit, hydraulic lift, bed, comfortable sofa, audio-visual set and washroom with modern facilities, till Biju Patnaik statue near Naveen Nivas. This is the same vehicle which he had used during the 2019 election campaign.

He will then garland the statue of his father former Chief Minister Biju Patnaik and address party leaders and workers from the bus.

Anticipating a huge crowd, air passengers were advised to reach BPIA three hours prior to their scheduled departures. 90 officers and 30 platoons of police force will be deployed at all important junctions of the city to regulate traffic and maintain law and order.

Notably, this road show of Naveen coincides with the back-to-back visits of senior BJP leaders to the state with an eye on the 2024 elections. BJP Odisha Prabhari Sunil Bansal is currently chairing party’s core committee meeting at BJP HQs in Bhubaneswar after Amita Shah’s August 8 visit. National president of the saffron party JP Nadda and national general secretary (Organisation) B L Santosh are also scheduled to travel to Odisha later this month.