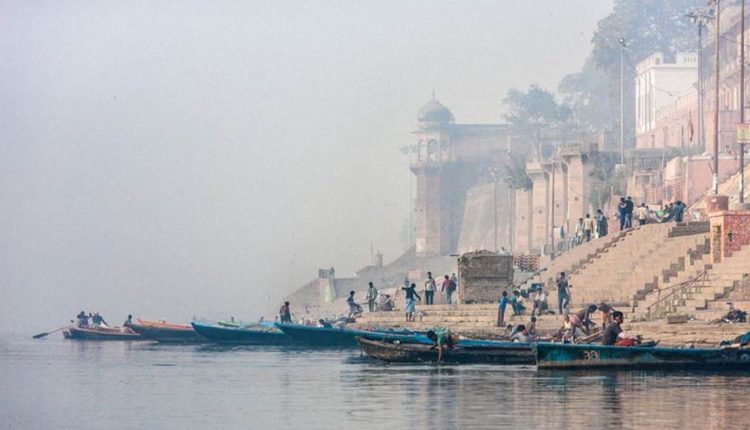 After getting down at Allahabad we took an auto and went in search of the Bharat Sevashram Sangh. Every body advised us not to go directly to the ghat. If one goes through the Sevashram, the priest will not hassle you nor would the boatmen take you to middle of the river and start making exorbitant demands. We reached the Sevashram and turned up our noses at the cramped but clean living arrangements. We met the Baba in charge of visitors to the Ashram who gave us the name of a Tangabala who would take us around. He had prepared an estimate of payment for the priests both at the ghat and at the confluence and the name of the boatman who would ferry us. Thankfully, all arrangement for transport, immersion of ashes, Brahmins for the rituals were made easily. There  would be no more haggling about charges and costs. We would not have to hear the threatening that the Aatma would not be released from worldly bondage if we didn’t meet their requirement; more we pay more Punya we gather, etc. – the common extortion by all these vendors.

We came out after freshening up. We found the Tangabala very friendly and courteous. He entertained us with conversation throughout the journey. “This time the Congress will comeback. We have seen the performance of the other parties”, he said. My friend Nandan said, “Vajpayee has been in the seat for only a year. When he has not completed his term how can you assess him?” He replied, “Saab the Lotus has been here in our state for five years now- what have they done? All parties are the same; there is nothing for the poor.” We looked at each other. Perhaps he guessed what we were thinking and said “Babu we had a lot hope in the Lotus but they were not allowed to function. Perhaps if they had a majority they could have done something. But in Delhi and Gujurat they came in full strength. Did they do anything for the poor ?” We were truly surprised at his keen understanding of politics.

I was curious and asked, “Do you think that it will be better if Indira Gandhi’s daughter-in-law Sonia comes to power?” He replied in a slightly raised tone, “No, no; nothing new will happen. Congress was there for a long time, we tried a change with V. P. Singh. He took the country back by fifty years.” I asked in surprise, “Why do you say that?” He retorted, “Babu, caste and creed were always there but they had not entered into voting. He introduced this Mandal and now everybody in every village is trying to enter into Mandal. People who had forgotten their caste also want to become Mandal. That is how has started this vote bank politics.”

The Tanga reached the Ganga Ghat where we offered Pinda, we were taken to the confluence in a overloaded boat where we submerged the ashes, had our bath and returned to the ghat again. We sat by the river side for some time as the priest was busy with other customers. The Tangabala sat on one end of the wooden bench we were sitting. He took a drag of beedi and said, “Babu tell me what justice is this? We at the Triveni immerse the ashes of the dead, so that it can go straight to the sea, for fear that the dead may be diseased. But the irony is, those of you who stay by the sea are also coming here for the purpose.”

I looked at his face wondering what he was speaking. He explained, “The tenth day rituals are all meant as precaution against disease of the dead. People who may have touched the disease-borne copse must bathe and wash their clothes. Thereafter they are to eat simple meals once a day for ten days. After ten to twelve days we wash everything including the house. This is detoxification”. We looked at him in surprise assuming that his long association with the Sadhus and Ascetics had enlightened him.

On our way back he started talking about many other things. We asked him what he would do if he were made Prime Minister. His reply opened our eyes. He said once he became Prime Minister he would abolish all departments except Police and Judiciary. Only one more department would function which would educate people on the advantages of education and healthcare Every child would get education – all to know the advantages of education, family planning and good agricultural practices. We were amazed by his commonsense. By that time we had reached Bharat Sevashram.

We finished our meal and were just resting when there was a knock on our door. It was the Tangabala. He had come just in time otherwise we would have missed the train as we had fallen fast asleep. We packed our things and loaded them on the Tanga and proceeded to the station. It was quite a distance. On the way he pointed out places of historic interest.

After some time the Tanga stopped by the road side. A ten or eleven year old girl stood there clad in a long skirt and blouse and holding a market bag in her hand. The girl stared at us eagerly. The Tangawala asked, “Babu can I take my daughter on the Tanga? After dropping you at the station we will have to proceed further.”  I was sitting in the front with the Tangabala and my friend Nandan sat in the back. He moved to one side and said,

“No problem! Come dear” and seated her by his side. On our way I asked the girl, “What are you studying my dear?” She shook head to indicate ‘no’ and showed five fingers of her hand. “So you have studied up to class five?” She nodded in assent. Her father said, “Tell them our problem beti”.

The girl narrated her story. They were five brothers and sisters and as the son was studying well in class eight, the girls had dropped out of school to do the house work and help him study. The eldest is taking care of the ailing mother; this girl is working two houses. She would wash the utensils, clean the house, and wash clothes in one house. In the afternoon she cooked chapattis and curry in another. Then she would take four chapattis and some curry and return home.

Nandan told her, “My dear I hope you have not forgotten what you have read. Please do not. Read story books and newspapers.” The girl informed us that from time to time she would read cinema story books or songs. Nandan was pleased and added “Your father knows a lot about the world. You can also do the same if you read newspapers. After your marriage you can keep your accounts.” With sermons like this from our friend Nandan all the way we reached the station.. It was almost dark.

I got down from the front and the Tangabala took our baggage from the back and lifted it to the coolie’s head. Suddenly Nandan exclaimed “Where is my purse?”. He started searching in his Kurta pocket. He looked under the back seat and found some pieces of papers which he claimed were in the purse. After searching the Tanga from top to bottom the money bag could not be found. We immediately suspected the Tangabala and his daughter – no one else had the time and opportunity to steal it. We had come straight to the station and passed our luggage to the coolie. No one came near though by this time there was a small crowd. It would not have been possible for anybody else to steal the purse.

We started questioning the father and daughter. People gathered around the Tanga. It was again thoroughly searched. The seats were turned over. The cloth covering on the Tanga roof was removed. But the purse was nowhere to be found. Both the Tangabala and his daughter were also thoroughly searched. The young volunteers did not miss the chance of passing their hands on the body of the girl. In the meantime, the train had arrived. As chance would have it, a constable heard the commotion and came up. The Tangabala and his daughter stood crying. We narrated the incident to the constable and went into the station.

We were not very worried. The purse only had six or seven hundred rupees. The only important thing lost was the small notebook with telephone numbers and addresses. Behind us we could hear the constable shouting, “You rascals, you think you can get away with pick-pocketing? Father and daughter stealing together! Let’s go the police station”.

We reached the platform and boarded the train, finding our berths in the compartment, settled in. After all we had to pass the night in comfort.

[Translated from the Odia original by Purabi Das]

VSSUT-Burla In Odisha To Remain Shut Till This Date