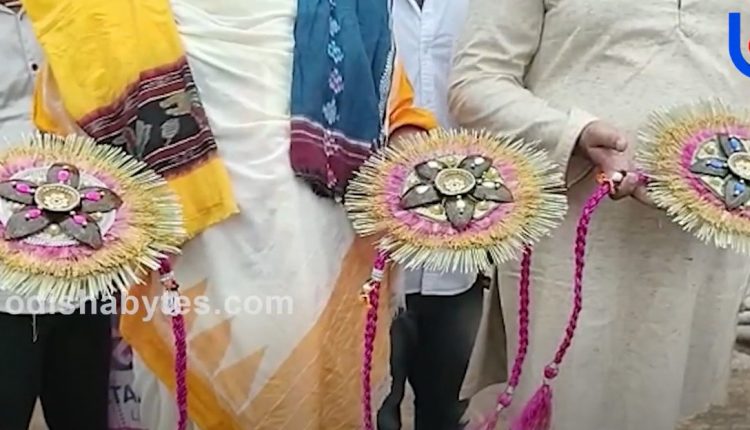 Puri: It’s Gamha Purnima and the birth ceremony of Lord Balabhadra is being celebrated at Jagannath Temple in the Pilgrim Town of Puri. Besides various other rituals, Devi Subhadra also ties rakhis prepared by Patara Bisoi servitors to Lord Jagannath and Lord Balabhadra on this day.

With three huge rakhis made from coconut husk, jute, and rice, Debashis Acharya from Bhadrak along with three other devotees visited the 12th-century shrine on Friday as offerings for the Lords. “It is Lord Balabhadra’s birthday today and we are lucky to have reached Puri Srimandir on this auspicious day. It is all because of Lord Jagannath’s blessing that we are here today,” said Debashis.

Gamha Purnima or Go Purnima, a festival of agriculturists to worship the cattle, is celebrated with much fervour across the state.

Along with the 54 areca nuts necklaces, four big rakhis are prepared for Lord Jagannath and Balabhadra and 10 small ones for the Parswa Devatas (minor deities) of the temple. The Basunga Pata is dipped in red, green, purple and yellow colours. With the help of a comb, the cloth is shredded into threads. With the four coloured Patas, the servitors then make four-layered Rakhis. They are in concentric circles one atop another with the lowest disc being the largest.

On this auspicious occasion, Lord Sudarshan proceed to Markand Pond in ‘chaudola’ decorated with golden garlands, where Sudha Suara observe some traditions by making the idol of Lord Balabhadra with wet clay. They spew life into the idol by chanting mantras and then offer ‘bhog’. The idol is later immersed in the pond. Following this, Lord Sudarshan proceeds to three Ashrams and returns to Srimandir late in the night.

Will Aamir Khan’s ‘Laal Singh Chaddha’ Be First Indian Film To Release In Pakistan Since 2019?