Snana Purnima Of Lord Jagannath: Will Devotees Be Allowed Darshan? 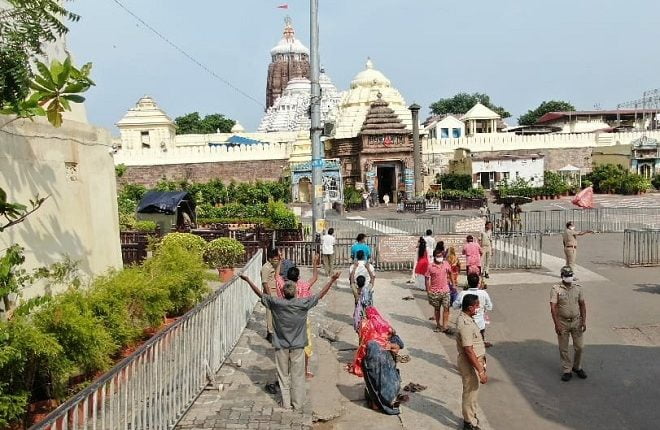 Puri: After Odisha government’s announcement on devotee-less Rath Yatra, all eyes are on the Debasnan Purnima of Lord Jagannath and his sibling, scheduled on June 24.

Will devotees be allowed? As per the present SOP issued by Shree Jagannath Temple Administration the Jagannath temple is closed for darshan till June 15.

Considering the eagerness among the devotees to have a glimpse of the Trinity and apprehending rush during the Debasnan Purnima on the SJTA is likely to extend the ban on darshan.

A three tier security ring will be set up along with barricading around the temple during the celebrations.

Puri Collector Samarth Verma said the focus is on health in the pilgrim town in view of coronavirus. The second dose vaccination of Sevayats has started as part of healthcare measure and construction of chariots is on in full swing.

The Special Relief Commissioner had on Thursday announced Rath Yatra will be held only in Puri without devotees to check the surge in coronavirus cases.

Also Read: Know The Guidelines For Rath Yatra Of Jagannath In Odisha’s Puri

Habisiali Bhawan In Puri Gets Ready To Welcome Jagannath Devotees

Places Of Worship Except Jagannath Dham Reopen In Odisha’s Puri