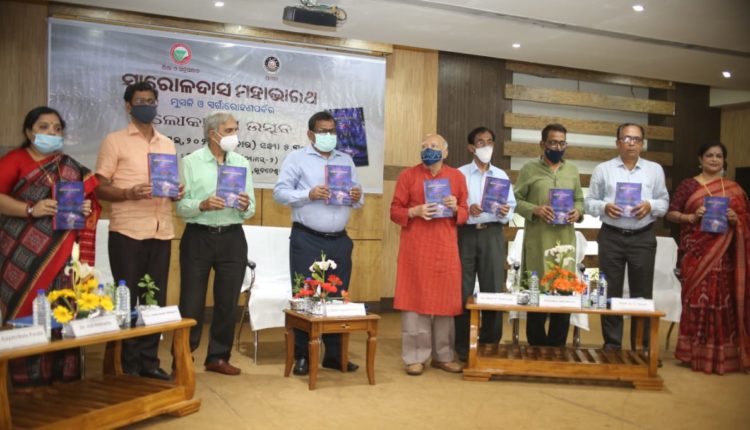 Bhubaneswar: Critical editions of two ‘Pravas’ of ‘Saroladas Mahabharatha’, written by  15th century poet Sarala Das, were released at a function on the premises of Siksha ‘O’ Anusandhan (SOA) Deemed to be University.

The critical editions of Mausala Parva and Swargarohan Parva, authored by the Aadi Kavi and published by SOA Deemed to be University were released by eminent scholar and linguist Debi Prasanna Pattanayak on Wednesday.

In a video message Chief Minister Naveen Patnaik hailed SOA’s endeavour saying Sarala Das’s epic provided a vivid picture of life at that time. “It is an excellent attempt,” he said.

Principal Secretary, Odia Language, Literature and Culture department, Bishnupada Sethi unveiled the digital edition of the work on the occasion. The epic contained 18 ‘parvas’, the critical editions of which the university plans to publish subsequently.

Hailing SOA’s endeavour, Dr. Pattanayak said it was a difficult task “but a lot more is needed to be done to bring Sarala Das’ stupendous work into limelight.” He, however, said research should be undertaken to clear the air on Sarala Das’s birth place and the time to which he belonged.

“There is a question mark on whether the poet belonged to the 9th -10th century
though it is generally believed that he lived in the 15th century,” he said.

The new edition was prepared after deep analysis of the available material and the words used were 500 to 600 years old. The digital edition of the publication containing the manuscripts used and the edited material would enable a reader to prepare his own epic, Prof. Dash said.

‘Ramayan’ Back On Television, Know When You Can…