Nayagarh: The COVID-19 tally in Nayagarh district surged to 1334 on Friday with an overnight addition of 75 new patients.

According to the district administration, all 75 new cases reported in the last 24 hours are local contact cases.

Of the new cases, the highest of 21 have been reported from Ranpur, followed by 15 from Odagaon, 12 from Daspalla, nine from Nayagarh, five from Nayagarh Municipality, four each from Bhapur, Khandapada, and Nuagaon and one from Gania. 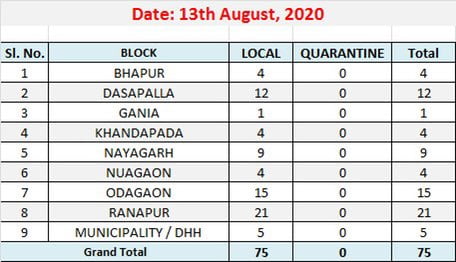 With eight deaths and 720 recoveries, Nayagarh now has 604 active cases.

What Happened To This Delhi Youth When He Went Gymming Post Unlock 3.0?