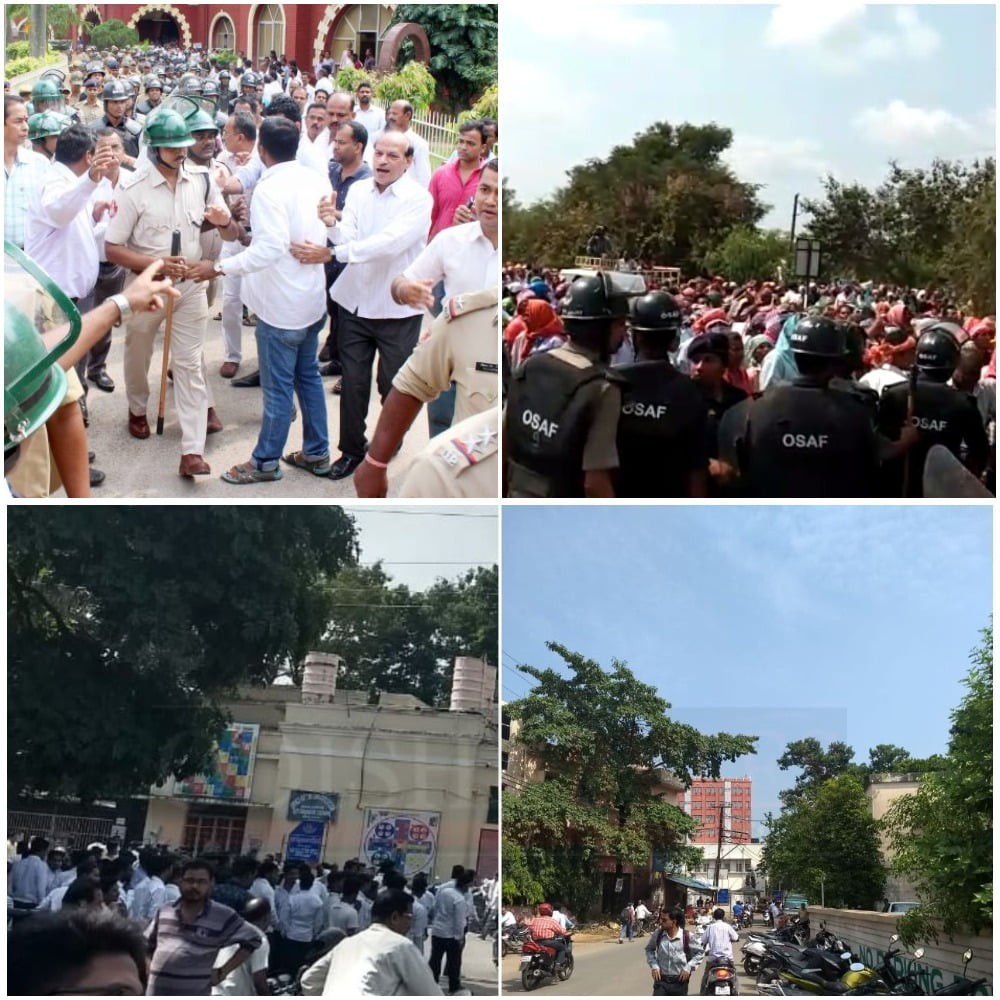 Bhubaneswar: Odisha which is all set to see the light of the New Year had witnessed three major agitations in 2018.

The state had witnessed a protracted agitation by the lawyers of the Orissa High Court Bar Association who had resorted to cease work on August 29 demanding legal action against the policemen for assaulting Debi Prasanna Patnaik, a practising lawyer of the High Court in Cuttack, on August 28.

Though the Commissionerate Police suspended three personnel, two constables and a havildar, the lawyers remained adamant demanding conviction of the erring cops.

Apart from the High Court, court work was also paralysed across the state as lawyers of 130 bar associations resorted to cease work in support of the agitation by the High Court Bar lawyers.

Taking note of the gravity of the situation, the Orissa High Court intervened in the matter on October 30 and directed the State Police to complete the investigation into the alleged police assault on a lawyer by November 9. To resolve the impasse, Director General of Police (DGP) R P Sharma had convened a meeting with the members of the High Court Bar Association on November 11.

The initiative taken by the High Court and the DGP finally paid off as the High Court Bar Association announced its decision to withdraw its two-and-half-month stir in the afternoon on November 17 after the three policemen involved in the assault on the lawyer appeared before the division bench of the High Court of Justice C R Das and tendered their unconditional apology for the incident.

To ensure no recurrence of such incident in future, the High Court had decided to form a 7-member high-level committee to decide on any dispute between the police and the lawyers in future. The decision of the committee will be final and accepted by the lawyers’ bodies.

Apart from the lawyers’ stir, the month-long agitation by the block grant teachers under the banner of the All Odisha School-College Teachers and Employees United Forum’ had also paralysed education in all block grant schools and colleges across the state.

The Forum had begun its agitation on March 26 demanding fulfilment of its six-point charter of demands including equal salary for equal work, provision of full aid and several other service conditions and issuance of notification regarding withdrawal of a compulsory affidavit clause to avail grant-in-aid.

However, the Forum put its indefinite strike on hold on April 19 following an assurance from the state government to look into their demands with a two-month ultimatum to the latter for the fulfilment of the demands. But it again resumed its agitation on August 16 as the state government failed to pay heed towards its legitimate demands.

The Forum intensified the agitation from September 12 after the meeting of the inter-ministerial committee, formed by the government with the Forum remained inconclusive. The Forum had again put its agitation on hold on October 12 after the Law department promised to look into this matter and make amendments once the Supreme Court resumes after Durga Puja holidays on October 26, which will pave way for implementation of 7th pay commission recommendations, pension and other service conditions.

The state also witnessed a month-long agitation by the Naba Nirman Krushak Sangathan (NNKS). Protesting against the lackadaisical attitude of the state government towards its long-standing demands, the Sangathan began a series of statewide agitation from January 19.

The farmers’ outfit had demanded a provision of Rs 21,600 crore for the security allowance in the state’s annual budget, minimum of support price (MSP) of paddy at Rs 5000 per quintal, monthly pension at Rs 5000 for the youth and Rs 1500 for the elderly.

The Sangathan on November 6 had decided to intensify its demand after it was not allowed to convene a mega convention in Bhubaneswar on November 5. The administration had clamped prohibitory order along the National Highway at Hansapal and Tamando on the outskirts of the city, to block the entry of the leaders and activists of the outfit into the city.

Following the announcement by the Sangathan to stage civil disobedience across the state, the state government had formed a ministerial committee November 6 to frame a term of reference (ToR) on the basis of which the demands of the farmers would be discussed. Though the committee had invited the representatives of the Sangathan to attend the meeting on November 7, the latter had rejected the request.

With no solution in sight, the farmers’ outfit is certainly going to prolong its agitation in 2019.