Record Spike In COVID-19 Cases In Odisha’s Koraput; One US Returnee Infected, 25 From 2 Municipality Areas 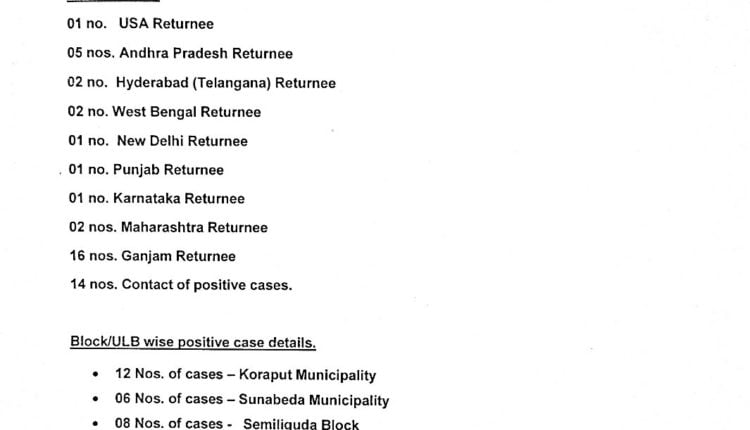 Jeypore: Koraput witnessed a sudden surge in COVID-19 cases with a record 45 people testing positive for the virus in the last 24 hours.

With this, the affected tally in the district touched 270 on Sunday.

Of the new patients, 27 have been detected in home quarantine while 14 are direct contacts of the previous cases and another four are among those housed in temporary medical centres (TMC), the district administration tweeted.

Among them, 16 are Ganjam returnees, five had recently travelled to Andhra Pradesh, two each to Hyderabad, West Bengal and Maharashtra while one each to New Delhi, Punjab, Karnataka and the US.

Twelve cases have been reported from Koraput municipality, six from Sunabeda, eight from Semiliguda, two from Koraput block, one from Potangi TMC, one from Khajuriput village, 13 from Jeypore municipality and one each from Sasahandi and Boipariguda.

Among them, one is a healthcare worker and four are police personnel.

With 80 patients having recovered from the infection, the district now has 190 active cases.

All Block Headquarters In Odisha’s Gajapati Dist Under Lockdown