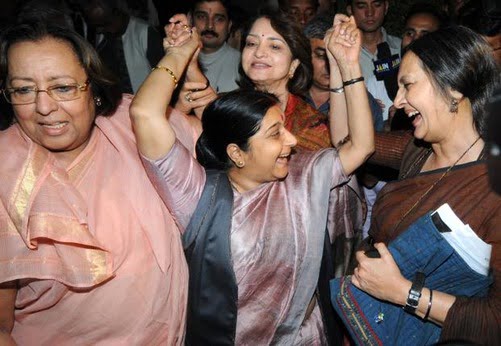 Bhubaneswar: Late Sushma Swaraj possessed a remarkable ability to turn adverse situations and uncomfortable moments to her advantage, thanks to her oratory skills and quick wit.

One such instance was in 1998, when she visited Bhubaneswar as the Information and Broadcasting Minister to attend an event at the Doordarshan Kendra in the city.

As the minister was being greeted on the dais, a little known group barged into the gathering waving black flags and shouting anti-Swaraj slogans.

The organisers were perplexed, but not so the indomitable Swaraj. Making light of the moment, she said, “My friends who have come to greet me with black flags have in fact done a great service to this auspicious occasion. Yeh jo black flag aap logo ke haath mein hain, darasal yeh kala tika hain, is shub avsar ko kisi ki nazar na lag jaye (The black flag you are holding is like a kaala tika to ward off the evil eye).”

No sooner she had completed her remarks, the crowd erupted with applause. The agitators went silent thereafter and the event went on peacefully.

Notwithstanding her tall political stature, Swaraj befriended one and all with ease, including the media that always enjoyed a comfort-level with her. And this correspondent was lucky to have been a personal witness to some such incidents.

The late leader had this gem to say when some journalists prodded her for a statement on a deadlock in Lok Sabha during the 2016 Budget Session. With half of the scribes, including this correspondent, dressed in white, the former External Affairs Minister quipped: “As I see you are all in white today. This is a good sign of things to come in the House. White is a symbol of peace. I am confident that Lok Sabha will function in perfect harmony for the rest of the day.”

Her statement proved prophetic. Lok Sabha did function for the rest of the day.

She not only came out as a saviour for hundreds of Indians stranded abroad, but also a friend for media persons travelling with her on foreign tours.

On one such occasion, she had threatened to postpone her trip by a day when a reporter accompanying her to a European nation, was confronted by the local authorities on a visa-related issue. She stayed put at the diplomatic lobby of the airport until the reporter joined the group for the trip back home.

BK Sharma To Don The Mantle Of Odisha DGP