Tata Takes Another Dig On Safety, This Time On Hyundai Grand i10 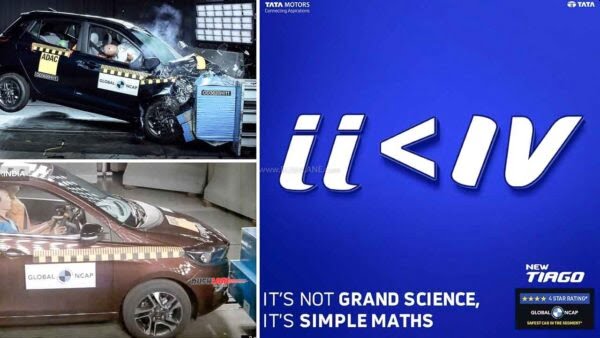 Mumbai: Tata Motors is on a mocking spree! After taking a jibe at Maruti for S-Presso’s zero-stars safety, this time it has targetted Hyundai Grand i10 for its 2-star Global NCAP result.

Tata has posted a graphics with roman numericals 2 and 4 in the same way Hyundai writes its ‘i’ of i10. The ad shows 2 is lesser than 4, implying Tata Tiago’s 4-star rating.

Tata also mocked Hyundai for using the word ‘Grand’ and wrote: “You can only wow some by just being grand on the paper. Make your drives #SeriouslyFun and awesome with the best-in-segment safety of New Tiago, rated 4 Stars by GNCAP.”

Currently, Tata and Mahindra have the safest cars in India while the Japanese and Korean counterparts are lagging behind in GNCAP crash tests. Tata’s lowest rating is 4 stars, while only one Maruti vehicle (Brezza) has achieved 4 stars.