The Hidden Gem Of Hyderabadi Biryani 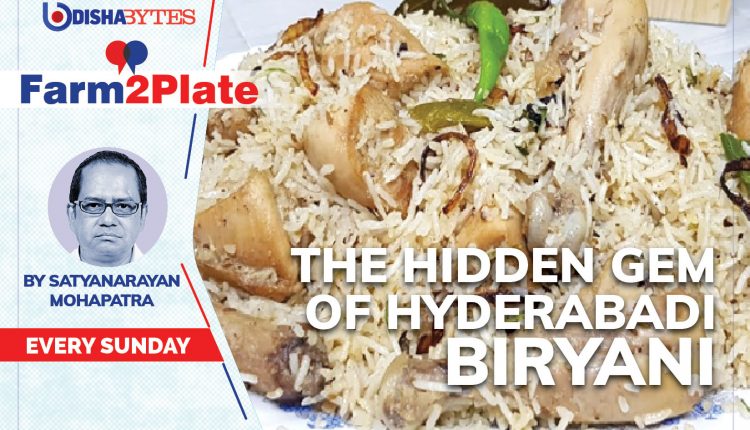 When I was in Hyderabad during one of my culinary research tours, I came across a version of Hyderbadi biryani called Sofiana/i biryani, which stands out with its subtle richness and flavour.

A hidden gem among Hyderabadi biryanis, this version was the choice of the Nizams and their kin. Sofiana/i biryani was once mostly prepared by the khansamah (chefs) of the royals of Hyderabad. But now it has dwindled to the Quick Service Restaurant (QSR) that serves the typical spicy Hyderabadi Dum Biryani.

The aromatic ingredients and detailed preparation: give Hyderabadi biryani its exclusive flavour and characteristics. From the very popular Zafrani biryani and chicken tikka biryani to mutton keema biryani, Hyderabad undoubtedly has myriad versions of biryani to offer.

Whenever somebody talks about Hyderabadi biryani, the obvious biryanis that strike our mind are the saffron-flavoured biryani or spicy versions, which are available in every nook and corner of Hyderabadi streets.

Sofiana/i biryani, also known as safeda (because it’s white), is an absolute exclusion. Unlike other biryanis, its richness comes from the use of khoya and creamy malai along with a list of whole spices (khada masala). In addition, this biryani is lighter and milder on the stomach. So, without any further ado, let’s learn how to make this creamy, white and flavourful biryani.

Sofiana/i it has its distinct root to Hyderabad though we find a modified version in Pakistani cuisine. As history goes, one of the Nizams developed this recipe with the help of his Afghani generals. The Nizam was very fond of biryani but could not digest much of spices, thus his Afghani generals curated this biryani. The recipe which was curated without saffron, and the white colour, was maintained by adding whole spices and at times it was powdered. The recipe got very popular and it was served on special occasions.

Today the dish is not very popular. Basically the demand for this subtler version of biryani is low, as the taste buds of most food lovers in Hyderabad have been fashioned by the spicy biryani which is available in the Irani cafes and restaurants. However, people who are fond of milder flavours still like his version of Sofiana/i, using almond and cashew paste.

Still some discerning customers want this item as part of their walima menu – wedding banquets. One hopes that this biryani regains its passion among foodies for its rich and flavourful culinary treat.

In a separate pan, add five cups of water, salt, ginger-garlic paste, green cardamoms, cloves and cinnamon and bring to a boil. Add the rice and milk and cook till the rice is three-fourth done.

Spread a layer of half the chicken in a pan. With a perforated spoon, layer half the rice over the chicken. Sprinkle cardamom powder and cream over the rice. Repeat the layers. Drizzle ghee around the edge of the pan. Cover and cook over a low heat for fifteen to twenty minutes. Serve hot