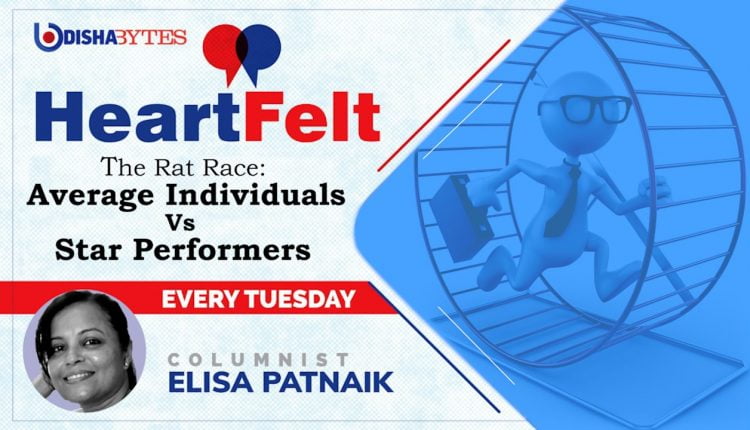 It was the quarterly Parent-Teacher Meeting (PTM) of Class I students in one of the leading schools of Bhubaneswar. But the atmosphere was no less sombre and officious than that of a serious corporate counselling session. Parents had solemn expressions waiting for their turn to speak to the various subject teachers of their wards. Some parents whose children had not performed ‘up to the mark’ were busy reprimanding them. As I waited for my turn, I heard a young mother, almost in tears, admonishing her son,“ I never knew I had to face a day like this. With your ‘poor’ performance I have to now bear the humiliation of collecting your report card from the Principal herself.”

I was stunned seeing the outburst of the parent as the child was just six years old. And the ‘poor’ performance was in fact, 69 per cent! As per the school’s policy, students scoring less than 70 per cent were required to meet the Principal along with their parents to collect their report cards. The school’s policy of promoting ‘excellence’ meant that every student aimed to score at least 80 per cent in every exam – right from preparatory classes. Every little competition and event was showcased as an opportunity for the wards and their parents to outshine each other. I was among the minority group of parents who was not perturbed when my child with 85 per cent was bracketed as ‘average’ and was even asked to take tuitions in Class I!

Not just this ‘leading’ school, majority of the so-called best schools in Bhubaneswar and other cities celebrate only the best, the crème de la crème, the Star Performers who score not less than 90 per cent. In fact, higher classes in many schools have sections segregating students as ‘top,’ ‘average’ and ‘poor’ performers with the teachers focussing the most on the section with the ‘finest’ students. No wonder, the Star Performers strutted around arrogantly with their collars up while the supposedly average performers faded into the background nursing poor confidence levels.

It’s as if an average child and person in today’s age has no place to be. And in this bargain, we create young adults about to begin their lives feeling inferior and inadequate. Some indeed perish, pushed to bear the high-pressure expectations from schools, parents and society to achieve and be the best.

Unfortunately too, it’s always academic excellence which sets the bar for distinction. Some brilliant stars shine through their way in sports, performing arts, fine arts, but they are certainly not considered in the same league.

I always wonder at this distinction which is not just glorified in schools but has become the practice everywhere – higher educational institutions, coaching centres, offices and even among families. It’s basic human nature to appreciate merit, the best talents,  and favour them too. But truly, do each one of us have the ability and the knack to be the best performers? And what about those who do their jobs fairly well, dimly lit perhaps, and may not be luminous enough to be the Star Performers? They do deserve a place in the sky.

This trend seems to be growing as an acceptable norm since the last decade or so as we applaud super productive, highly efficient successful multi-taskers. I remember, during our school days we had a motley mix of students – best, good, average and not so good – spread across front, middle and last benches and all in one section. Though teachers appreciated the meritorious students, they never derided those who even failed their exams and valued their other talents. And now when we have all reached our mid-life, we all seem to be on the same boat more or less.

Aspiration, ambition, efficiency and hard work are indeed praiseworthy attributes but what about character, experience, ethics and values? I have come across many such Star Performers who have dimmed the shine of others for their own brilliance, have sparkled with borrowed or stolen lights. If everyone becomes a Star Performer and a high achiever, will the shine continue to remain on the stars? And what if all the shining stars collide with each other?

Unfortunately, we as parents today have intentionally and unintentionally assumed this to be the only path to be pursued for our children. Children and young adults, especially from privileged classes, are often presented this picture of perfection where the aspiration and pressure to be flawless is considered essential.

Accepting our children’s averageness is not something to be ashamed of. As their guardians it’s important for us to recognise what they are best at, nurture their talents and teach them to expect and experience failure. The relentless spotlight on pre-defined success, notions of perfection and ambitions – has robbed many such genuine and bright stars who couldn’t end up being Star Performers.

The ‘average’ human being is fast fading from our social construct. Being extraordinary, outstanding, exceptional is what sells now. Be the best or remained ignored and disregarded – is the message that is being given loud and clear.

If extraordinary is the new normal, what is to become then of the ordinary? My heart aches for the youngsters and adults alike who contribute in their own valuable ways but quite often remain uncelebrated and anonymous throughout their lives. Can we pause and appreciate one such person we know?

This does not mean that excellence and merit should not be celebrated or rewarded. By all means. But let’s not do this at the cost of the less fortunate or less capable ones. I think people suffer as much for being ‘inadequate’ and for not being ‘good enough.’  Deriding them further for their mediocrity and their ordinariness will be an added burden hard to bear. Moreover, there is no single definition of achievement and success. We all know how it reveals differently to different people.

Being kind and empathetic, teaching kindness as an attribute is fast disappearing from this swim or sink world of today. It’s ironic that it took a severe jolt like the COVID pandemic to make us rethink and reorganise our priorities, to be kind, compassionate and considerate. We need to embrace our humaneness, be aware of the diversity, accept each other’s ability and encourage our loved ones to give their best. Sometimes, it’s okay to be left behind. It’s okay not to be part of the race even. And not be a Star Performer.

The sky is full of stars, some shining brilliantly, some winking, and some dimly lit. But they all have their place in the firmament doing their own jobs. We humans need to believe this about our fellow beings as well.

Renewable Sources The Answer To An Energy-Efficient Transport System

When Music Becomes Our Saviour

Was There Delay In Filing For Aryan Khan’s Bail?…

E-Cigarettes Are Not Safe, Have Harmful Chemicals: Research