This 6-Year-Old In Odisha’s Kendrapara Runs 24 Km Daily; Read Why 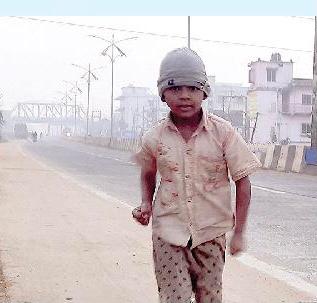 Kendrapara: It is 3 am on a winter morning. A six-year-old boy of Tarando under Nikirai police limits in Kendrapara district is lacing up and all set to run.

Muddy roads are his practice ground and the fog does not hinder his vision. The six-year-old boy, Kishore, has found his calling.

He aspires to make it big in athletics and earn fame for the state. For this, he has been preparing untiringly along with his sister everyday, without fail.

The two wake up in the wee hours and set out on a 24-km run. Not to go by his age, the little boy covers 24 km in two hours and is the heartthrob of all in his village as well as the vicinity.

Having participated in national-level contests, Liza has been guiding her brother in the field sport and preparing him for national contests  from a young age.

His target is to run from Kendrapara to Maa Sarala temple in Jagatsinghpur district in the first week of January.

Their father is a daily wager working as a painter and on lean days he runs egg shop in the village.

The odds notwithstanding, the siblings are determined to make it to the national level champions in near future.

Men Account For 70% of COVID-19 Deaths In India: Health Ministry

Unmarried Adult Couple Can Live Together Even If Man Isn’t Of Marriageable Age: HC