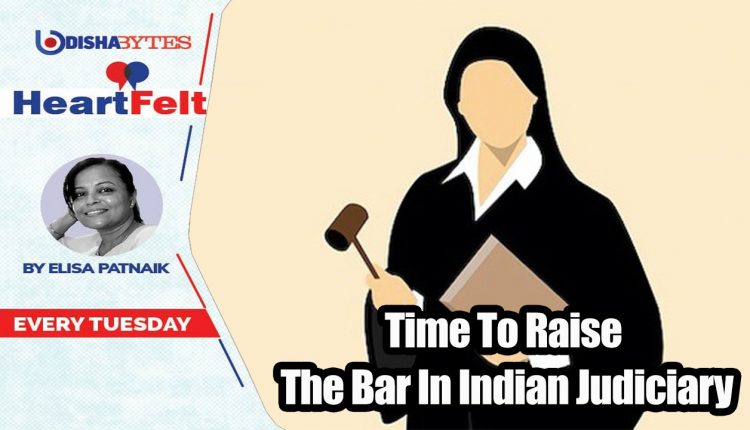 When Chief Justice of India (CJI) D.Y. Chandrachud recently said that the structure of legal profession is “feudal, patriarchal and not accommodating of women” and that there is a need to have a democratised and merit-based process for entry of more women and marginalised sections of society – he was calling a spade a spade.

While an increasing number of girls and women are enrolling in law courses and are joining the legal profession, when it comes to their representation in the Country’s judicial system, it is abysmally low. Law institutes across the country now witness a nearly 50% enrolment of girl students but as per data shared by the Government with the Parliament recently, only 15% of lawyers in India are women.

Out of 1.7 million advocates registered, only 15% are women. Women constitute 11.5% of the total High Court (HC) judges in India and there are four women judges out of the sitting 33 in the Supreme Court (SC) at present. Likewise, there are hardly any women Chief Justices in the High Courts of India.

According to data presented by the Law Ministry to the Parliament recently, Meghalaya has 59.3% of women lawyers, the highest in the country and Uttar Pradesh the lowest with just 8.7% women lawyers.

As per the Know Your High Court Judges (KHOJ) dataset jointly collated and analysed by a group of organisations, fewer than 8% of High Court judges in the last 25 years have been women, more than half of India’s HCs have not had a woman Chief Justice.

In addition, out of the total 160 Chief Justices, only 11 have been females and since its inception, there have been only 11 women judges in the Supreme Court and no woman CJI. Moreover, merely 83 of the 680 judges in the HCs are women and only 30% of subordinate judges are female.

It’s no surprise that the apex body of lawyers, Bar Council of India (BCI), has no woman representation at present and the representation of women in the state bar councils across India are close to a measly two per cent.

Besides patriarchal norms and gender discrimination, the reasons for the under-representation of women in the judiciary are multi-fold. Women not only have to face hostile atmospheres within courtrooms but they are also considered unequal by their male counterparts in the bar and bench.

While more women tend to enter the lower judiciary at the entry-level basis of an entrance examination, their entry to the higher judiciary is restricted. There also seems to be a high attrition rate among women lawyers. Many women caught in domestic and familial responsibilities are forced to drop out of practice failing to meet the eligibility criteria for district judges.

Female lawyers continue to face gender discrimination despite their official positions. A case in point is Justice Rekha Palli who was constantly referred to as ‘Sir’ while hearing a case in the Delhi High Court early this year. When she objected to the address and said “I am not Sir. I hope you can make that out,” the concerned lawyer apologised and said, “Sorry, it is because of the Chair you are sitting in!”

Justice Leila Seth in her autobiography ‘On Balance’ narrates the inherent sexism and the added baggage that came with being a woman in the judiciary. Writing about her first social event with High Court judges, she says that her colleagues commented that since she was here, they wouldn’t have to worry about catering anymore as she would make all the tea arrangements!

Many people still have the misconception that women lawyers practice only in family courts, whereas something like tax, corporate and criminal law are a male lawyer’s job.

Women lawyers practising in the top court are worst affected by the selection process which seems to be heavily biased towards men. Women advocates appearing in the SC are hardly considered for appointment as judges. The absence of women in the collegium of HCs and the SC – panels which select and recommend names for appointment of judges – is also an indicator of the prevalent gender disparity in the judiciary.

The lack of adequate and gender-friendly infrastructure is another barrier to women in the profession. Crowded and cramped courtrooms, the absence of restrooms, and childcare facilities often discourage women from practising in the existing scenario. According to a survey conducted by Vidhi in 2019, about 15% per cent of courts in India do not have a women’s toilet. It revealed that only about 40% of district courts in India have functional women’s toilets while 100 districts do not have toilet facilities for women.

The current CJI has also concurred about the issue of prevalent bias either from female lawyers’ colleagues or litigants which not just affects the women, but also those on the bench creating a completely unwelcome atmosphere inside courtrooms for women.

Despite the challenges and under-representation, however, trailblazing women lawyers like Menaka Guruswamy, Flavia Agnes, Indira Jaising, Kamini Jaiswal and many others have managed to make an impressionable mark in the Indian judiciary.

There are a few glimmers of hope as well with recent developments. Four out of the 33 judges in the top court today are women, the highest number of women judges in history. Among the states, for example, Telangana has set a new benchmark with women judges accounting for more than 30% in the HC and 52% in the district courts.

The presence of female lawyers in public institutions is not only a visible marker of gender equality but is also necessary for diversity in decision-making and judgements in our legal system. A larger presence of women leading to greater visibility will positively encourage more women to seek justice and fight for their rights through courts.

Promoting women advocates in the judiciary will not just promote gender equality but also foster female judicial appointments in other decision-making positions such as legislative and executive branches of the government, shifting gender stereotypes, and changing attitudes. Diversity in courts is sure to usher different perspectives and judgements enriching the legal field.

Importantly, however, for more women to enter the legal system we need to build an enabling environment and facilitate their entry through reservation, conscious decisions to approve more women lawyers at a higher level and create supporting gender-friendly service conditions.

According to Justice Chandrachud, when we talk of having more women in the judiciary, it’s equally necessary for us to lay building blocks for the future by creating access to women now. The first step is entering the chambers of senior lawyers which is an old boys club, he is reported to have said recently.

Some states such as Assam, Andhra Pradesh, Telangana, Odisha and Rajasthan have reservations for women at the lower judiciary resulting in an increasing number of women judicial officers.

Under-representation of women in the judiciary is the same as the under-representation of women in our society and is a barrier for inclusive law and justice. Diversity in terms of gender, caste, religion, and social and economic backgrounds not just makes public institutions sensitive to the concerns of varied sections of society but is also a true indicator of an impartial system. The presence of women lawyers is definitely a critical component of a gender-responsive justice delivery system.

The miniscule representation of women in the Indian judiciary is a serious issue and we need to raise the bar for an equitable and inclusive justice delivery system.