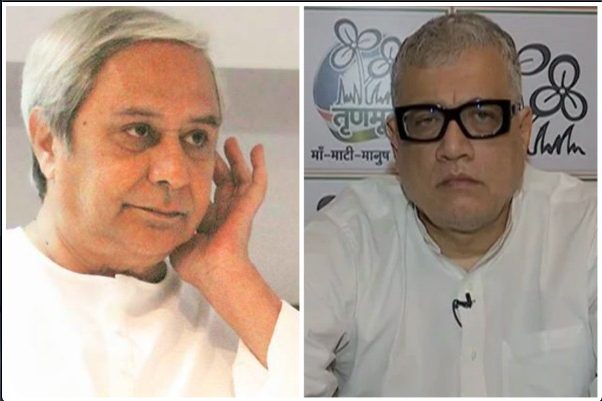 Bhubaneswar: The secular credentials of Odisha Chief Minister Naveen Patnaik and his party, the Biju Janata Dal (BJD), have come under attack from the Trinamool Congress (TMC) in the wake of the former supporting the BJP government at the Centre on different issues.

Defending TMC’s decision to abstain in the Vice-Presidential election and fissures in the Opposition unity bid, party MP Derek O’Brien branded the regional party as the “biggest enabler of BJP”. “Nobody discusses this regional party or its CM. Mr Naveen Patnaik and BJD are India’s number one enabling party to execute the bigoted, divisive agenda of the BJP,” he told NDTV on Friday.

Referring to Naveen’s recent Italy visit, the TMC MP further said: “The CM taking pretty pictures somewhere in the Vatican won’t do. If you really want to fight the BJP, come and fight it inside and outside Parliament.”

Responding to the TMC MP’s allegations, BJD spokesperson Lenin Mohanty said the nation is well aware that this is a party with a difference which not only enjoys the trust of the people, who have elected Naveen Patnaik to the CM’s post for five consecutive terms, but also that of NITI Aayog and the UN for governance. “Post 2019 elections, the CM has always stressed cooperative and constructive relationship with the Centre. The party has been extending issue-based support keeping the interests of Odisha in mind,” he said.

Defending BJD’s support to both NDA nominees for President and Vice President posts, he said Murmu is from a tribal community in Odisha with proven credentials while Dhankhar is a farmer with knowledge of the Constitution, courtesy his vast experience as a lawyer and Governor.

“Derek O’Brien’s statement reeks of frustration. Yashwant Sinha was essentially TMC’s candidate for the President’s post but the party saw cross-voting with its MLAs and MPs voting for Murmu. These elections are all about numbers and the result of the vice-presidential election may be a foregone conclusion, given the BJP’s superior numbers in the Lok Sabha. Therefore, the TMC needs to answer who is piggy riding whom,” he said.

Derek is possibly the first political leader from outside Odisha in recent times to launch a caustic attack on Naveen and BJD.

Possibly apprehending that he might get a ‘soft Hindutva’ tag, Naveen met Pope Francis, the Pope of Rome and Head of Catholic Church, in Vatican City during his 10-day trip to Italy and UAE in late June.

This meeting seems to have not gone down well with the TMC since the Centre had earlier denied permission to West Bengal Chief Minister Mamata Banerjee to attend a World Peace Conference in Rome on October 6 and 7, 2021, which had the Pope among others in attendance. The Centre had then said the “event is not commensurate in status for participation by the chief minister of a state”.

The Odisha CM is India’s first head of a provincial government to have had an interaction with the Pope and the meeting ahead of the presidential elections also raised eyebrows, especially in political circles, since the trip, according to sources, was cleared by the Centre without much ado as it needed BJD’s support in the presidential election, which was held on July 18.

The BJD has also extended support to NDA’s Vice Presidential nominee Jagdeep Dhankhar after Prime Minister Narendra Modi called Naveen on July 16. A representative of BJD was also present during the filing of the nomination by Dhankhar as was the case during Droupadi Murmu, the NDA nominee who won the 16th Presidential polls.

In 2017, the Odisha CM, however, had preferred to go with Gopalkrishna Gandhi, the opposition’s candidate for Vice-President though it supported NDA’s Presidential candidate, Ram Nath Kovind, at the time.

Though Naveen continues to assert his party’s stand of maintaining equidistance both from the BJP and the Congress, events post 2019 Lok Sabha polls hint at growing bonhomie between the two parties. BJD not only decided to back BJP’s Om Birla for the Speaker’s post but also sprang a surprise by supporting the candidature of BJP’s Ashwini Vaishnav for Rajya Sabha from Odisha. This despite the fact that the party had the requisite strength in the State Assembly to send its candidates unopposed to the three vacant seats in the Upper House.

The Naveen Patnaik-led BJD has also supported several controversial bills in Parliament to bail out the Centre, including the Jammu and Kashmir Reservation (Amendment) Bill, 2019, the triple talaq and the citizenship amendment bill.

The regional party was criticised for maintaining a stoic silence on burning issues of fuel prices hike and essential commodities which left the Parliament proceedings disrupted in April this year. The BJD members also supported contentious bills like the Criminal Procedure (Identification) Bill, 2022 during the discussion in the House.