Tree Tale: This Man From Kendrapara Demanded 1,000 Saplings As Dowry 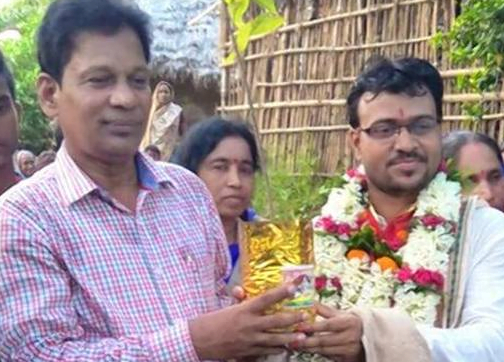 Bhubaneswar: In most part of the Indian subcontinent, marriage is not only about the tying of knot but also dowry. What began as giving essentials to the bride, was subsequently turned into horrendous demands from groom’s family.

Turning dowry down to something unique and beautiful, 33-year-old Saroj Kant Biswal from Odisha’s Kendrapara, astonished everyone when he demanded 1,000 saplings from his in-laws.

Biswal, a schoolteacher and member of ‘Gachha Tie Sathi Tie’ (a tree is a friend) campaign which promotes afforestation, never liked the idea of an extravagant marriage with shimmer and lights. He received full support from his fiancee, Rashmirekha, also a schoolteacher.

“I am against any form of dowry. I wanted to spread the message of tree protection, and what could have been a better occasion than my marriage? As we are both teachers, our students will definitely be motivated by this gesture,” said Biswal.

On June 22, when they got married, Biswal’s parents came back with a truck loaded with saplings of a variety of fruits.

“I would urge others to think of innovative ways to spread awareness about conserving and protecting the nature,” he added.

After the marriage rituals were over, Biswal took time out and distributed those saplings among villagers. It was also given as return gifts to all the guests present there.

This brings to light the on-going protests in Delhi, urging government not to go ahead with the idea of cutting 16,500 trees for redevelopment of South Delhi. Around 100 Dehiites came together at Sarojini Nagar on Saturday, with placards saying ‘Mujhe Mat Maaro’, ‘Don’t cut down a life’.

Severe pollution had already created havoc in the capital of India, which triggered the protest. “We live in a gas chamber here and even then, instead of planting trees, government is going on cutting down 50-60 years old trees. It’s just sad,” said one of the protesters, Pooja.

Fire In SCB Brought Under Control, No Loss Of Life

Watch: 10 More Cobras Rescued From Another House In Bhadrak