Port of Spain: Trinidad and Tobago has about 300 temples of different sizes, mostly in the central and southern region. One of the famous temples is the ‘Temple in the Sea’. The soul of it is the story of Siewdass Sadhu, who first built it. Siewdass was only seven years old when his parents Boodhram and Bissoondayia brought him from Benares to Trinidad and Tobago along with his two younger brothers. The parents worked as indentured labourers. After they passed away, Siewdass finished the remaining serving period of the indentureship and visited his ancestral land in India in 1926. In 1947, Siewdass built a temple on the unused swamp land close to the shore owned by the sugar cane company Tate and Lyle.

When he completed it, Tate and Lyle Ltd. demanded that Siewdass demolish it. Sadhu refused to do so. The company took him to court. The court granted an order that the temple might be demolished, fined Siewdass 100 pounds or fourteen days in prison for trespassing. Siewdass went to jail. However, as soon as he came out, he decided to build the temple in the sea since the sea is the “no man’s land”. With just his bicycle as his means of transport, a leather bag and two buckets on either side of the handlebars, he transported cement and sand. It took him about 25 years to single-handedly build the temple. After he completed, he visited India in the 1970s and took his last breath in the motherland. 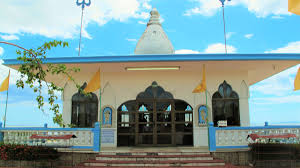 After Siewdass’ death, the temple got damaged due to erosion from the sea, but in 1995, Randolph Rampersad, an engineer and a third-generation Trinidadian of indenture ancestry, took the initiative to rebuild it. The rebuilt temple got consecrated on December 10, 1995. The other famous temple is associated with an 85-foot tall statue of Hanuman built according to the Dravidian style of architecture.

The indentured Indians, in their ‘jahaji’ bundle or carry bag, brought things close to their identity and day to day use. These articles included Ramayana of Tulsidas, plants like tulsi, cooking utensils like tawa, belna, chimta, karahi etc. The signature Caribbean breakfast called doubles made of cooked peas and bara (something like puri or bhature) introduced to the Trinidadian society by Mamu Deen had ancestral roots in Uttar Pradesh. Roti shops are omnipresent in Trinidad and Tobago where one can buy one’s lunch. Dal and white flower are two crucial ingredients of these recipes. Since the indentured labourers from India did not bring wheat flour or atta, they used white flour supplied from Europe. The other household food items are baigini, sahina, alu pai, dhal puri, tarkari and chokha.

Cricket is in Trinbago’s air. One cannot miss signages, billboards, posters and statues of living legend Brian Lara on streets, stadia and squares. The Brian Lara stadium very proudly flashes his cricketing milestones. The story of spinner Subhas Gupte and Carol Goberdhan was one of the very first Indo-Trini love stories that I heard in Port of Spain. It was the very first tour of the Indian cricket team under legendary Vijay Hazare to West Indies in 1953, and Subhas Gupte was the star spinner in the group, with 27 wickets in five test matches. Both fell in love and got married after a few years. Gupte lived with his family in Trinidad after his cricket career and died in 2002. Carolyn, their daughter, met me and presented a copy of her book “Love Without Boundaries”, which she wrote to tell the love story of her parents to her daughter. According to the book, the pick-up line that Subhas Gupte chose to draw the attention of Carol at a reception in Queen’s Oval club was, “Yours is the kind of face that I would like to see every morning at my breakfast table”.

Any cricketing event that I attend, I hear light-hearted comments like the West Indian team needs somebody like Mahender Singh Dhoni or Virat Kohli or Rohit Sharma. India’s 1983 World Cup win, Kapil Dev, Sunil Gavaskar, Saurav Ganguli and Rahul Dravid are frequently mentioned in the cricket circle. The banter of Tendulkar-Lara comparison is bound to creep in. Ambassadors of the cricket playing countries enjoy special treatment in cricket clubs in Trinidad and Tobago. Since the 1950s, cricketers of Indian descent have made an immense contribution to West Indian cricket. Some of them are Sonny Ramadhin, Inshan Ali, Dinanath Ramnarine, Daren Ganga, Sherwin Ganga, Ravi Rampaul, Dinanath Ramnarine, Denesh Ramdin, Sunil Narine, Samuel Badree and Robin Singh.

Trinbagonians of Indian origin have achieved phenomenal successes, some of them rising to hold the highest political offices of the country. Dr. Basdeo Pandey was Prime Minister from 1995 to 2001, and Mrs. Kamla Persad-Bissesar became the first woman Prime Minister in the Caribbean in 2010 and held the office till 2015. Dr. Pandey was India’s chief guest at the Republic Day in 1997. Mrs. Persad-Bissessar visited India in January 2012 and was the chief guest at the Prabasi Bharatiya Diwas in Jaipur.

Two of the very successful programmes of the Government of India that have contributed immensely to more robust people-to-people contacts are the ‘Know India Programme’ and the flagship ‘Indian Technical and Economic Cooperation Programme’ (ITEC) under India’s development partnership framework. Over 500 youngsters and professionals from this country have visited India under these schemes in the last five years. 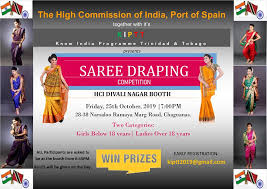 There are about 600 families of NRIs who are engaged in business, teaching, yoga and medicine. The Government of Trinidad and Tobago has waived the visa requirement for Indian nationals visiting for tourism and business purposes for three months.

The High Commission or Embassy of India based in Port of Spain also looks after two other island nations – Grenada with a population of 110,000 and the Commonwealth of Dominica with a population of 70,000. In addition to the political relationship with these nations, the Mission facilitates economic and trade relations, diaspora engagements, development partnership, cultural cooperation and educational ties. The Embassy also extends passport, visa and other consular services, extends necessary assistance to distressed Indian citizens.

The principal economies of Grenada and Dominica are tourism, Information Technology, improved agriculture and higher education, especially for medicine. International connectivity with these islands is limited. In the case of natural calamity like a hurricane, providing support to stranded visitors poses a severe challenge. For instance, during the COVID-19 lockdown, we had to wait for months before we could evacuate stranded Indians via chartered planes. The Indian community in these places, however, is very supportive of any initiative taken by the Embassy. Both Grenada and Dominica have provisions for Citizenship by Investment, but Trinidad and Tobago does not run any such programme.

Trinidad & Tobago Diary Part I: Colours Of India In…