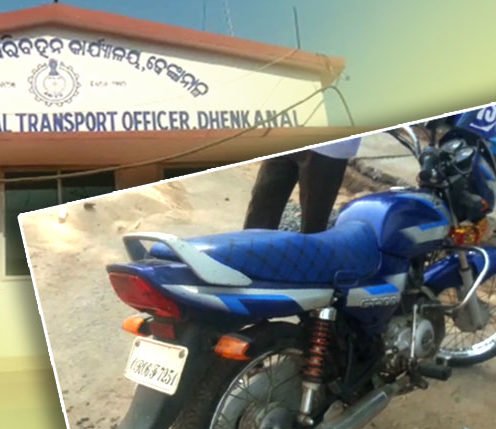 Dhenkanal: A truck and a motorcycle have been plying on the roads with the same registration number for 15 years in different states. The motorcycle has been running in Odisha’s Dhenkanal district while the truck has been operating in Jagdalpur city in Chhattisgarh.

The matter came to light when the motorcycle owner, Kabichandra Behera, went to get a Pollution under Control (PUC) certificate for his vehicle.

A resident of Radha Krushna Bazar in Dhenkanal town, Behera had purchased the motorcycle on December 30, 2005, and registered it at Dhenkanal regional transport office (RTO) under the number OR06F7251, sources said.

The two-wheeler owner was refused a PUC certificate a year ago and it was then that he came to know from the Dhenkanal RTO that a truck is registered with the same number in Chhattisgarh’s Jagdalpur city.

However, Behera was neither able to procure a PUC certificate for his vehicle nor was he able to re-register that as it expired after 15 years. He has been running from pillar to post in the RTO office for the last 1.5 years.

According to Dhenkanal Regional Transport Officer Basanta Kumar Majhi, the matter has been reported to the National Informatics Centre (NIC). The two-wheeler can be re-registered after clearance from the NIC.

Jagdalpur RTO, meanwhile, has also sought details of the truck. They will take further steps in this regard after receiving a reply from Jagdalpur RTO, Majhi added.

ALSO READ: Elderly Couple Dies In Sleep Due To Short Circuit In Odisha

Elderly Couple Dies In Sleep Due To Short Circuit In Odisha