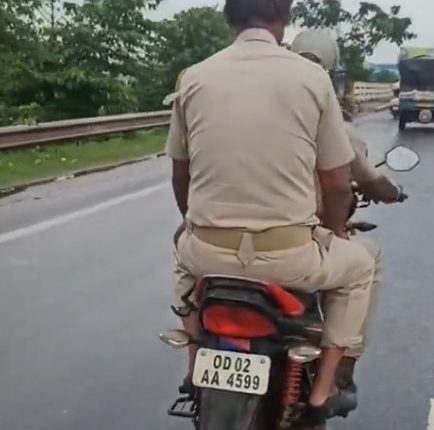 Bhubaneswar: Thanks to smart phone and social media, the police were found on wrong side of the law in the capital city. With the violation of traffic rules captured in camera, the Commissionerate Police took steps for action against erring police personnel.

Even as the state government has made it mandatory for the driver as well as pillion rider of two-wheelers to wear helmets since the beginning of this year and wearing face masks compulsory in public places, two police personnel were found going on a motorcycle violating the norms.

A Twitter user, who had paid penalty for violating the rules, shared a photo of the police personnel travelling on the bike without wearing helmets and face masks from Rasulgarh to Palasuni in the city recently. 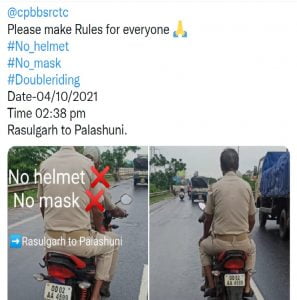 The twitter user, Santosh Kumar Behera, tagging the Commissionerate Police tweeted, “Dear Commissionerate Police, when a common man accidentally commit a mistake, our cops doesn’t hesitate to fine him, instead of point out his/her mistakes. Recently I made a mistake and I paid Rs.1000 penalty. Are the rules only for general civilians? Hope I get my answer (sic)”.

After the picture was uploaded, the Commissionerate Police tweeted that the complaint has been forwarded to Deputy Commissioner of Police, Bhubaneswar and DCP Traffic for necessary action.