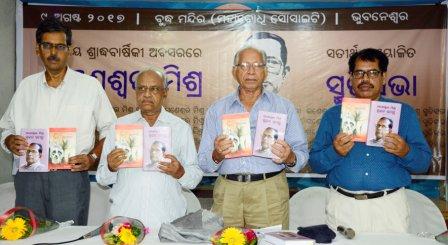 Bhubaneswar: Translation of literary works serve as a window to the outside world, said renowned translator Prof Jatindra Kumar Nayak while delivering the second Ganeswar Mishra memorial lecture at Buddha Mandir here on Wednesday.
At a function, organised by socio-cultural organisation Sateertha to commemorate the second death anniversary of eminent litterateur Ganeswar Mishra, Nayak said, “Translation is like a window because it helps us connect with the world beyond us and also brings the outside world to us.”
Two books, Srujana Samagra Part 3 (collection of Ganeswar Mishra’s short stories) and ‘Satarathi Bhoota Gapa (collection of 17 ghost stories), authored by Ganeswar Mishra were released on the occasion. Well-known writers Shantanu Acharya, Adhyapak Biswaranjan and Biraj Mohan Das did the honours along with Nayak.
Noted sculptor Rabi Rath presented a sculpture of Mishra made by him to the latter’s family.

Nayak highlighted Mishra’s contribution to the field of translation and said he always took keen interest in translation because it enriched Odia literature and helped export Odisha and its literary works to outsiders. Nayak said Mishra’s effort to include translation as a special paper at the PG level in Utkal University in the 1970s was commendable as no other university in India had offered it till then.
“Translation from Odia to English as well as other languages was as important as translation of literary texts in English and other languages to Odia,” he pointed out, while speaking on the growth of translation related to Odia literature.
Biswaranjan said Mishra’s writings were free from western influence and he had devised a new kind of English usage rooted in Indian culture, full of ‘Anubhuti’ (experience) and ‘Anubhava’ (feelings). “Se nijaku lekhichanti, nija samaya ku lekhichanti (He wrote about himself, he wrote about his times),” he said, praising Mishra’s lucid writing style.
Acharya appreciated Mishra’s concise style of writing and underscored the need to popularise Odia literature within the state as well as translate important works in Odia for non-Odia readers.
Das proposed the vote of thanks.

One more person dies of swine flu, toll rises to 4