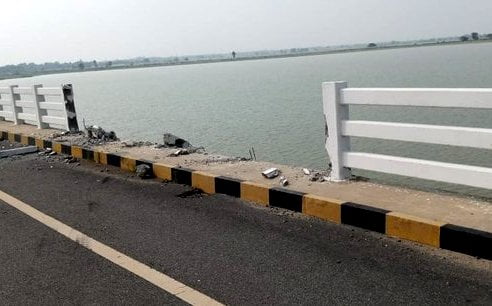 Jharsuguda: Two persons went missing after a truck fell off the Sapne bridge into the Ib river in Jharsuguda district on Tuesday afternoon.

According to reports, the driver of a speeding truck — coming from Rengali in Sambalpur district and headed for Rampela in Jharsuguda district — lost control and the vehicle skidded off the road and fell into the river after breaking the side wall of the bridge.

The driver Aditya Sahu managed to come out of the cabin and tried to swim ashore, before being rescued by some local fishermen.

A fire brigade rushed to the spot and began a search operation to trace the two missing persons — Jitendra Sahu and Papu Sahu.

One More BJD Leader Tests Positive For COVID-19 In Odisha

Labour Migration: Outside Buses Under RTO Scanner In Odisha’s Ganjam

Kansa Appeals Against Setting Forests On Fire In Jharsuguda