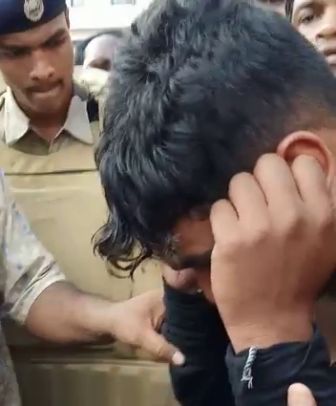 Burla: A day after an alleged violence against a doctor at Veer Surendra Sai Institute of Medical Sciences and Research (VIMSAR) here, his colleagues are now in the dock for thrashing a youth in full public glare. A video of this incident went viral on social media on Monday.

In the video, some doctors can be seen thrashing the youth in the presence of the police outside the VIMSAR premises, and forcing him to do the sit-ups and apologise to them by touching their feet.

On Sunday, some medical students of VIMSAR had caught hold of two youths while they were trying to flee after allegedly manhandling Prof Suryakant Patjoshi of the Neurology department. They had resorted to violence after the doctor reportedly refused to accompany them to a private nursing home.

The students later gheraoed the hospital and demanded a probe into the incident.

On being informed, police reached the hospital and detained the two for interrogation. The video seems to have been shot at that time. However, one of the youths managed to escape while being taken to the police station.

Talking to the mediapersons in Sambalpur, DIG (South Western Range), Himanshu Lal said that he was aware of the incident. “I will review it tomorrow and take necessary action against whoever found guilty,” he added.

Earlier in the day, Sambalpur SP Kanwar Vishal Singh had said that an investigation was on to ascertain the details of the incident.

General secretary of the Odisha Medical Service Association (OMSA) Punyashloka Das said that Association will send a fact-finding team to VIMSAR for an on-the-spot inquiry.

Stating that the young doctors might have assaulted the youth in a fit of rage, he said the fact-finding team will get the details of the incident and submit a report after which the Association will take necessary steps.

The youth’s father Thana Sundar Behera said some doctors called up his son and thrashed him. Police can get the details of the incident from the CCTV camera installed there. It will also be known if he had assaulted the doctors, as being alleged, from the footage, he added.

Later in the day, Behera lodged a complaint against the doctors at the Burla Police Station. On the basis of the complaint, police have registered a case under Sections 506 (criminal intimidation), 323 (voluntarily causing hurt), 341 (wrongful restraint) and 34 (acts done by several persons in furtherance of common intention) of the IPC.

Low Pressure To Trigger Heavy Rainfall In Odisha In Next 72 Hours: IMD