Vision Of Dystopia Vs Logic Of Masses 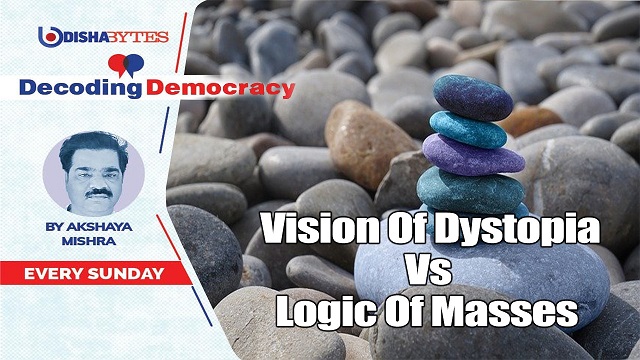 The rise of populism has led many to paint a dystopian vision of India’s future. Like all dystopias it is ugly and scary, replete with images of anarchy, disorder and directionlessness.

The masses, they complain, are overwhelming the classes and street power is asserting itself in unacceptable ways. Crudity overshadows serious national discourse making impossible civilised dialogue. Such a scenario, dominated primarily by emotions, leaves little space for intellectuals and free-thinkers. It is, they believe, calculated to weaken institutional buffers to protect democracy, and ultimately do away with it altogether.

The grouse is understandable. But one can offer little beyond sympathy.

The old order is cracking and disintegrating under attacks from reactionary forces and the contours of a new one are still hazy. The resurgent forces pose questions for which it has no convincing answers. Their ideology has failed people. The collapse of democracy scenario floating around is obviously their creation.

Considering their apprehension of the unknown and possible threat to their positions of privilege, their consternation is not difficult to fathom. The new order may dump them wholesale, introducing aggressive players radically opposed to their way of thinking. However, to a large extent their fear is about the capacity of the masses to think and act reasonably and responsibly.

The position smacks of elitist arrogance to say the least, and ignorance of the dynamic force that democracy is. It is full of irony too, considering democracy is supposed to be about people. Their attitude makes its definition ‘of the people, by the people, for the people’, which every school kid is supposed to know, a sorry joke. Under the paradigm they are used to, people vote; that is where their role ends. The power elite run the show. If elections change anything, they only replace one set of elite with another. The reality is the elite operate through a ‘system’ that is cunningly calibrated to keeping the masses out and maximising the benefits for its own. The system is supposed to be transparent, unbiased and fair, but it rarely is.

Every revolution, according to scholars, aims to break this concentration of power and influence with a few and redistribute both among people. Democracy itself is a product of many such revolutions as are the concepts of rights and freedom inherent to it. When it devolves into elitocracy or oligarchy, it is signal for a change.

The choice of the word ‘revolution’ is deliberate. The element of crude force may not be pronounced in the present global churn but the impact and scale are as telling. Products of long pent-up frustration and anger, they cannot be expected to be sweet affairs, as critics hope. Guillotines were terribly busy after the French revolution. In all others perceived enemies of the new are usually eliminated or subdued through violence. We haven’t gone that far, we won’t. Maybe because our revolution is less ambitious. It seeks drastic change in, and not complete overthrow of the old. Offending set attitudes, certitudes and sensibilities, is par for the course. Like all revolutions, it is chaotic in the beginning, a work in progress.

Such revolutions have taken place in the world over the last few years and they have taken the democratic route. From the US to Turkey, Great Britain, Brazil, India and parts of Europe popular voice has been on the ascendant and its road to power has been through elections. That makes the accusation that populist leaders such as Narendra Modi and Donald Trump are manipulating mass sentiment to gain power a bit odd. These leaders have only positioned themselves well to take advantage of the general mood. When elections, and not violent upheaval, provide legitimacy to change, questioning the intelligence or gullibility of people is downright condescending. It is the same lot which voted in the earlier regimes too. They were not called stupid then. Some people certainly are being sore losers. Perhaps it is this very approach that led to fall of the old elite.

The dystopia they are imagining now might be a possibility, but they seem to overlook the fact that the old arrangement was as dystopian for the masses, necessitating the current change. Few analyses about the rise of populism and populist leaders with authoritarian tendencies bother to introspect this. If the supposed disregard for truth among the new set of world leaders is troubling, then it must be considered that the truth peddled by the earlier bunch was even less palatable for the masses. If the former is charged with subverting institutions of liberal democracy, it must be understood that those stood thoroughly discredited among people.

Instead of whining they should be pondering what led to alienation of people from democracy. If they are serious about reviving themselves, they must respect people a bit more, because the solution to democracy lies within democracy. A wise move would be to draw an algorithm of alienation, factoring in every step that caused the distancing of the masses. It does not help to frame the entire development in the Right vs Left context. The man on the street is ideology neutral. He simply judges what works for him and what does not.