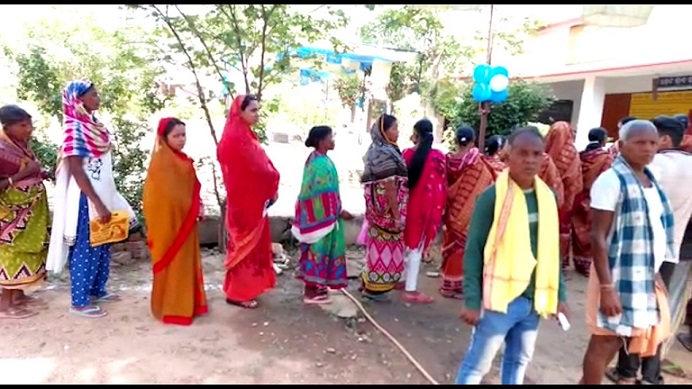 Jharsuguda: The bypoll to Brajrajnagar Assembly constituency in Odisha’s Jharsuguda district saw 71.90% voter turnout at the end of polling on Tuesday.

“The exact polling percentage will be known only after polling parties return. In the 2019 elections, Brajarajnagar recorded 78% voter turnout. The assembly segment might see a marginal rise in turnout this year,” said Chief Electoral Officer Sushil Kumar Lohani.

He further said that rain and thunderstorm affected polling between 3 pm and 4 pm, but people continued to queue up. “EVMs were found defective in four booths and those were fixed,” he said.

No untoward incident has been reported from any booth, he added.

As many as 2,14,878 voters will exercise their franchise to decide the fate of 11 candidates. The counting of votes will take place on June 3.

Sixty booths have been identified as sensitive. There are five pink booths. Webcasting arrangements have been made at 50 per cent booths.

Around 1,000 police personnel and three CAPF companies have been deployed to ensure free and fair polls.

The bypoll was necessitated following the death of Brajrajnagar MLA Kishore Mohanty on December 30 last year due to cardiac arrest.

The BJD has fielded Alaka Mohanty, wife of Kishore Mohanty.

The Congress has fielded Kishore Chandra Patel while the BJP candidate is Radharani Panda, who represented the constituency from 2014 to 2019.