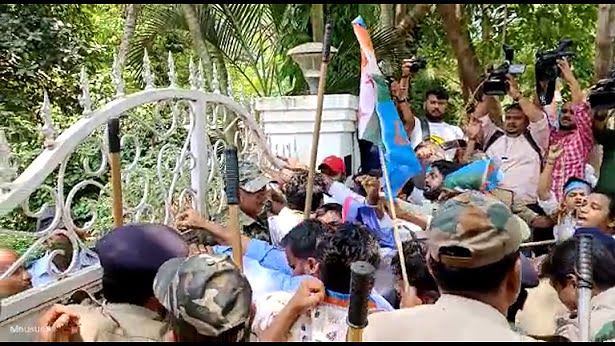 Bhubaneswar: The activists of Odisha Chhatra Congress gheraoed the residence of Higher Education Minister Arun Sahoo, here, in protest against the state government’s decision on imposing restrictions on self-finance courses in government universities.

Hundreds of activists of the student wing of Congress staged a dharna in front of the minister’s house and raised slogans against him. They also allegedly hurled tomatoes at the house. Later, police dispersed them to restore normalcy.

Stating that the government policy would deprive financially weak and meritorious students of pursuing self-finance courses, the agitating Chhatra Congress workers demanded resignation of the minister. Stating that private colleges would benefit from the government’s decision, they said the minister was hands in glove with those colleges.

They also alleged that the minister was responsible for admission of students by producing face certificates in different colleges of the state as was evident from the incident in prestigious BJB College in Bhubaneswar.

The Higher Education department had become the centre of corruption, they said, adding that the minister must resign on moral ground.