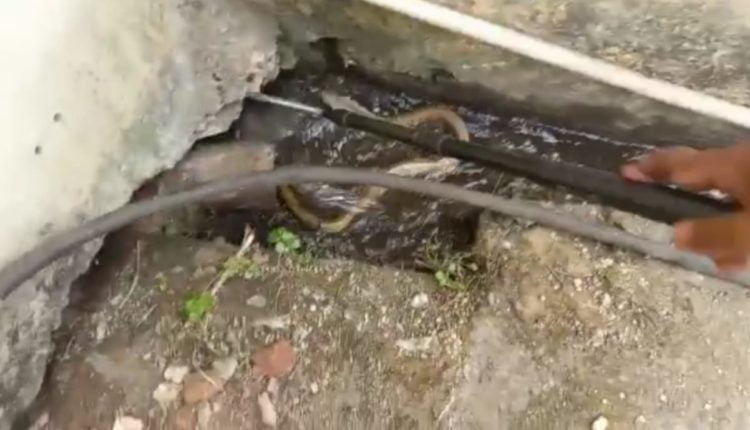 Bhubaneswar: The Snake Helpline has rescued an Indian cobra from a bathroom of Biju Patnaik International Airport in the Odisha capital.

According to sources, the snake was spotted by the airport officials on Wednesday night. Before they could capture it, the cobra entered into an uncovered drainage pipe in the bathroom.

When the airport officials again saw the snake’s head on the other end of the pipe at around 10 am on Thursday, they informed the Snake Helpline. A team of the Helpline led by its secretary Subhendu Mallik rushed to the spot and tried to rescue the slither.

They poured phenyl and acid from the bathroom opening of the pipe to force the snake to come out of the other end. As the cobra did not emerge from its hiding, they also poured petrol in the pipe and set fire to it. This time also they failed.

Finally, the Fire Brigade on the airport campus was called. The Fire personnel pumped water in high pressure into the pipe and the cobra came out. Subhendu immediately captured the snake with a hook, put it in a bag and took it to release in a forest area.