[Watch] Man & Animal: This Odisha Forest Guard Is A Picture Of Courage As He Tames A Raging Elephant 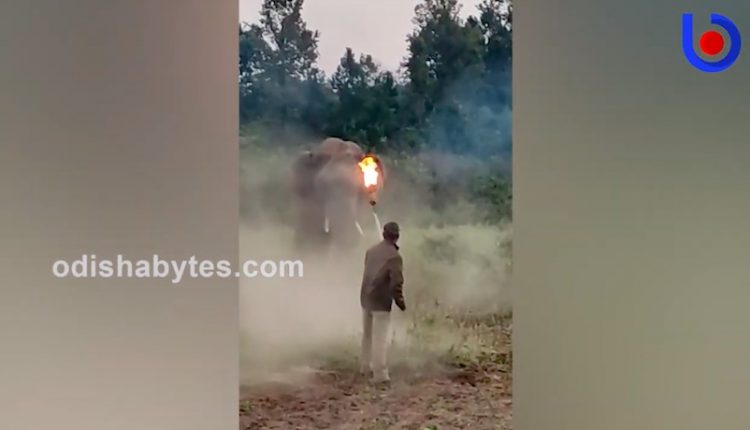 Bhubaneswar: It requires nerves of steel and presence of mind to confront a raging elephant with no harm to man or animal. Showing exemplary courage, Forest Guard Chitta Ranjan Miri drove away the bull elephant armed with only a ‘mashal.’

The elephant strayed into the Chadchadi & Angabira villages of Sambalpur district under Redhakhol forest division on Tuesday and started damaging crops. Chitta Ranjan was entrusted with the job of driving back the elephant to the jungle and safeguarding the village people.

While everyone else backtracked, Chitta Ranjan Miri stood his ground and persisted patiently.

“We are trained to drive elephants with minimum use of force so as to avoid any human or elephant casualties. My experience also says elephants only fear the fire. When it charged towards me I just showed the mashal towards the raging bull and it stopped at once. This was expected. Otherwise, I could have been easily trampled by the elephant.”

Subhendu Mallik, Honorary Wildlife Warden of Khurdaa district said, “We have seen people desperately using petrol bombs and firecrackers to drive away elephants from villages. But here, Chitta Ranjan proved that knowledge of elephant behaviour is the key.”

Chip In My Body, Being Controlled, Says Man Who Tried To Enter NSA Ajit Doval’s Residence