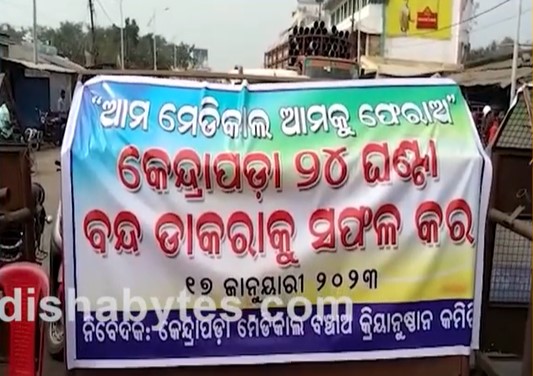 Kendrapada: A bandh was observed by ‘Medical Banchao Kriyanusthan Committee’ in Odisha’s Kendrapada on Tuesday to press for the demand of setting up of a City Hospital.

According to sources, several members of the association blocked roads at various places in Kendrapada town disrupting vehicular movement.

The agitators are demanding the setting up of a City Hospital following the relocation of the district headquarters hospital (DHH).

In view of the bandh, the district administration declared the closure of all educational institutions to avoid any untoward incidents. Similarly, shops and business establishments were shut down. Cops were also deployed throughout the area in order to maintain law and order.

Online Medical Certificates Mandatory For DL From Jan 26 In Odisha