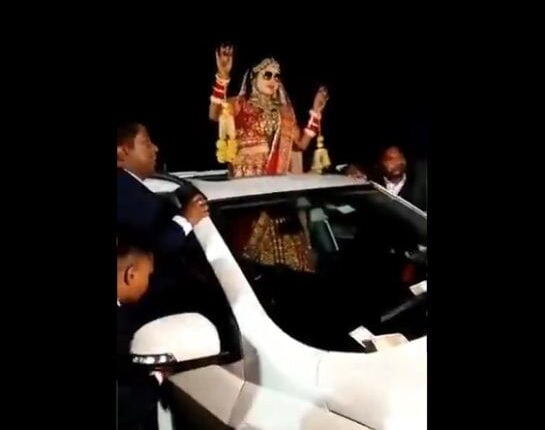 Muzaffarnagar: A bride had a close shave when a speeding vehicle ploughed through a wedding procession in Uttar Pradesh’s Muzaffarnagar district.

According to India Today, Hema, who was set to marry Ankur, opened the sunroof of her car and started dancing on seeing the baraat on the Dehradun highway while on her way to the wedding venue on Tuesday night.

also joined her and started dancing around her car.

In the 30-second video, which has gone viral, people from the groom’s side can also be seen dancing around the white car. An explosion is heard to her left in the final few seconds of the clip and at least two men are thrown into the air.

This dance could have been fatal – open sun-roofed car dancing Bride in UP’s Muzaffarnagar has a narrow escape after a speeding vehicle hits Baraat on road leaving one dead and many injured @umeshpathaklive @Uppolice pic.twitter.com/hMmzhxTgsV

The driver of the killer vehicle managed to flee soon after the accident. Police have recovered the vehicle and probe is on, it added.

Two Grooms From Bengal Stopped At Odisha Border For This…