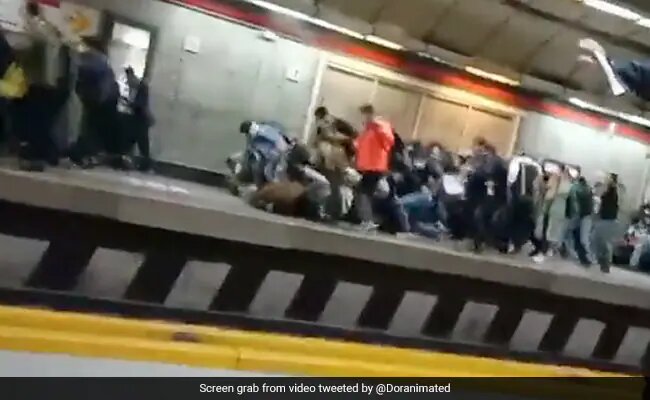 Tehran:  Security forces in Iran appear to open fire on dozens of commuters at a Tehran metro station, causing them to scramble and fall over each other on the platform., In a widely shared video verified by the news agency AFPAnother verified video showed members of the security forces, including plainclothes officers, attacking women without hijab headscarves on an underground train, NDTV reported.

“We’ll fight! We’ll die! We’ll take back Iran!” a crowd of protesters could be heard chanting on a Tehran street, in a video published by the 1500tasvir social media monitor. Street violence raged across Iran as protests sparked by the September 16 death of Amini intensified on the anniversary of a lethal 2019 crackdown.

Security officials cause a stampede in a Tehran metro station when they open fire on protestors. pic.twitter.com/e55HAfKcpS

Iran issued a series of death sentences as women-led protests over Mahsa Amini’s death in custody entered the third month Wednesday, with clashes reportedly claiming at least seven lives in two days. That toll did not include six people authorities said were killed by gunmen who attacked protesters and police later Wednesday in the southwestern province of Khuzestan.

Amini, a 22-year-old Iranian woman of Kurdish origin, died in the custody of the notorious morality police after her arrest for an alleged breach of Iran’s strict dress code for women. Organisers of the protests have called for three days of actions to commemorate hundreds killed in the “Bloody Aban” — or Bloody November — demonstrations that erupted on November 15, 2019, after a shock decision to hike fuel prices. The anniversary gave new momentum to the Amini protests, which have seen women burn their headscarves and confront security forces on the streets.