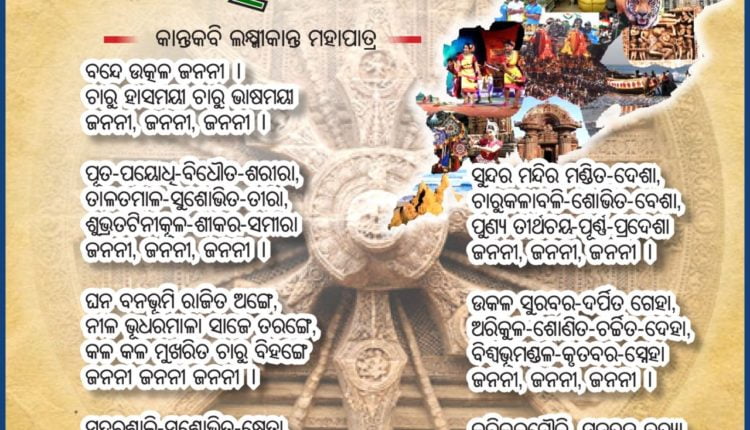 Bhubaneswar: The whole of Odisha will join the largest choir and sing aloud ‘Bande Utkala Janani’, expressing solidarity with the frontline corona warriors, at 5.30 pm on Saturday.

According to official sources, Unit 1 High School Ground, Commissionerate of Police Building and AG Chhak in Bhubaneswar will reverberates with the state anthem with progrmmes being planned at these places.

The song will be played at all establishments of East Coast Railway, including railway stations across Odisha.

“Irrespective of the place and work, all people have been requested to stand up and sing ‘Bande Utkal Janani’ at 5.30 pm,” a statement issued by the Chief Minister”s Office on Friday said. No vehicles will ply on roads during this period, it added.

But did you know the song was first recoded in the voice of Gokul Mohanty in 1932. Here’s the old-school tune of ‘Bande Utkala Janani’ from the gramophone record:

This patriotic poem was written by Kantakabi Laxmikanta Mohapatra in Sanskrit in 1912.  A paean of praise for Mother Utkal, it was first sung at the Utkal Sammilani’s Conference, movement for a separate province of Odisha, in Balasore the same year.

In the 1990s, the state government decided to make it mandatory for members to stand up and pay respect to the song at the end of any Odisha Legislative Assembly session. Government schools across the state begin the day with this song.

Here are the other versions of the song:

The solo rendition of the song by popular Odia singer Trupti Das.

Rituraj Mohanty had also collaborated with Sona Mohapatra and Ram Sampath for another version of the song for the Coke Studio. He, however, was accused of  warping the state anthem on the show.

And this one from the Odia movie ‘Biju Babu’ starring Anubhav Mohanty with music by Shankar-Ehsaan-Loy in the voice of Asha Bhonsle.

Know Trains That Will Not Run To Puri Till Further Notice